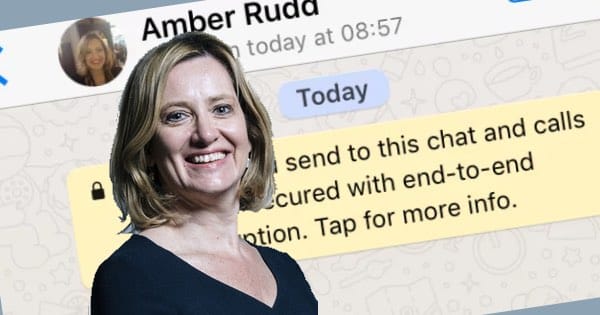 Rudd, who has recently claimed that “real people” don’t care if the likes of WhatsApp keep their messages private, had been asked by a member of the audience to explain how end-to-end encryption actually worked.

The Home Secretary (perhaps sensibly) declined to tackle that challenge, and instead said:

“It’s so easy to be patronised in this business. We will do our best to understand it. We will take advice from other people but I do feel that there is a sea of criticism for any of us who try and legislate in new areas, who will automatically be sneered at and laughed at for not getting it right.”

Trust me Amber, we’re not laughing.

A accurate statement if you remove the words "need to"

Fortunately, some sanity was restored at the event by one of the other speakers on the panel – Michael Beckerman of the Internet Association, representing the views of Google, Microsoft and other tech giants:

“Since it is just math and it has been invented it can’t uninvented… So even if every internet company that we represent said ‘ok we are turning off encryption’ you are just weakening the security for everybody in this room but that math, that technology still exists for others to use on other platforms.”

Encryption is a good thing.