We all know that malware is a huge problem on the Windows platform. Every day, something like 400,000 new Windows malware variants are dissected by security labs, and most people’s anti-virus software is set to download updates on a pretty much continual basis in an attempt to keep up.

It sounds bad because it *is* bad. No other operating system comes close for the sheer amount of malware in existence for it, but it’s not the only way to measure the scale of the problem.

A new study from Alcatel-Lucent’s Motive Security Labs, for instance, would measure the malware threat not by the number of Trojans, viruses and worms in existence for different operating systems… but instead, by the proportion of infections intercepted per platform.

Breaking down the proportion of malware-infected devices observed by the researchers during 2013 and 2014, found Android and Windows battling for dominance. 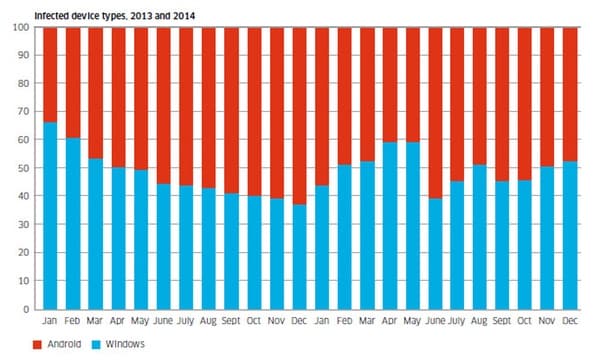 “Android phones and tablets are responsible for about 50% of the malware infections observed. Currently most mobile malware is distributed as “Trojanized” apps and Android offers the easiest target for this because of its open app environment.”

According to the report, mobile malware evolved during 2014, become more mature and sophisticated. Increasingly, online criminals are taking advantage of the mobile ecosystem, spying on smartphone users’ activity, tracking their location, or making cash by sending SMS messages to premium rate services.

And it’s clear that nearly all of the mobile malware threats are designed for the Android operating system. iPhone, Blackberry and Windows Mobile make up less than 1% of the infections observed by the researchers, no doubt helped by the more rigorous vetting and less laissez-faire approach taken by the iOS and Blackberry app stores.

On one hand, you can view Android’s share of the malware problem as an amazing achievement for the mobile operating system – clearly it’s been a huge success, and found plenty of customers around the world.

But it’s also an enormous worry, especially for businesses where users are storing sensitive corporate information on their Android devices. And particularly considering the seemingly significant problems that many Android users appear to have in keeping their operating systems patched and updated.

In fact, in my view, it’s something of a shame to see Android following in Windows’ footsteps down the malware path quite so closely…

According to the study, 0.68% of mobile devices are currently infected with malware – a growth of 25% in 2014. One has to wonder how much worse the situation is going to get in 2015.

No-one these days would seriously connect a Windows computer to the net without anti-virus protection. But how many Android users do you know who have even considered installing an anti-virus program?