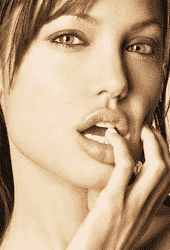 Just think of the hours you would spend hanging around for close-ups of those ridiculously large lips, or being called in to do the heavy-lifting when Ms Jolie isn’t available to pick up one of her menagerie of children.

One thing you probably wouldn’t expect if you’re the stunt bottom of a Hollywood superstar, is to get as much unwanted attention from the world’s tabloids as the famous person you are pretending to be.

But that is, allegedly, exactly what happened to Eunice Huthart – the former stunt double of Angelina Jolie.

According to news reports, Eunice Huthart has launched legal proceedings against the US wing of Rupert Murdoch’s media empire for alleged hacking of her mobile phone messages.

The damages claim, lodged in a Californian district court, alleges that the stunt double’s cellphone messages were snooped upon to provide stories published in The Sun and the disgraced News of the World during 2004 and 2005.

At the time, Eunice Huthart was sharing a house with Angelina Jolie in Los Angeles, where the actress was working on the spy movie “Mr and Mrs Smith” with Brad Pitt.

Of course, it was during the filming of that film that Jolie and Pitt began a relationship, making them extremely interesting to tabloid journalists hunting for a showbiz scoop.

If that’s true, the most likely scenario is that private investigators broke into Huthart’s voicemail system (possibly because she had not changed the default passcode) and were able to listen to messages that had been left for her, before passing the information on to reporters at the London-based newspapers.

According to court documents, Huthart “believes that they were hacking her cellular telephone as a means to obtain information about Ms Jolie”.

These latest claims will come as a blow to Rupert Murdoch, as his businesses attempt to draw a line under the phone hacking saga. The fact that people are now formally launching legal proceedings against News Corporation in the United States, could mean that this story is far from over.