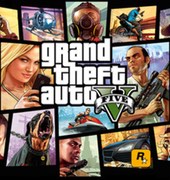 Watch out if you’re a fan of the Grand Theft Auto V video game (known by all coolcats as GTA V).

Because hackers are crafting malware, disguised as mods for the popular game.

First, some background. GTA V allows players to mess with their game universe by adding “mods” (modifications) that can entirely change the experience.

So, if you think it would be fun to have whales falling from the sky midway through your game, that’s fine:

Sign up to our newsletter
Security news, advice, and tips.
The Largest Mammal on Land

(Sadly no sign of a bowl of petunias. Google it if you don’t know what I’m talking about.)

So far, so harmless. Apart from for anyone who happens to be standing under the whale.

But GTA V’s online forums are now warning players that malicious code has been found in two mods: ‘Angry Planes’ and ‘No Clip’.

The No Clip mod is supposed to give you the ghost-like ability within the game to walk through walls and objects, while the Angry Planes will find you harassed by aggressive pilots.

By all accounts, the mods did what they claimed – but they also secretly installed a file called fade.exe, which connected to the internet and resulted in malware stealing keypresses from victims’ computers.

A report from VirusTotal suggests that many anti-virus products are now detecting the malware, but not before the mods had already been downloaded and run by hundreds of thousands of GTA fans.

The risk is, of course, that the keylogging malware will have stolen passwords from computer users – not just those that they might use on gaming sites, but also for other online activity.

As a result, if you determine that your PC may have been infected by the malware it may make sense to ensure that you change your login credentials. That advice is echoed by the administrators of the GTA 5 Mods website.

In addition, I would recommend that it would also be wise to be much more wary before installing mods and other unknown software on your computer in future.