In the below example, I’m searching for “hello world” on Google, Yahoo and Bing.

Can you spot the difference?

Well, did you notice?

Perhaps most people wouldn’t – unless you display the different pages next to each other like that.

What I’m hoping you spotted has nothing to do with the search results, but with the URL in the address bar. 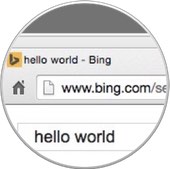 On Google and Yahoo, you will see the little green padlock which denotes a secure HTTPS connection.

On Bing, there isn’t one

At least not yet.

Because the great news is that Microsoft has announced that it will be encrypting Bing users’ search traffic by default later this year.

“Bing has already been offering users the option to encrypt search traffic for about a year and a half now. Beginning this summer, we will begin the process of encrypting search traffic by default. This means that traffic originating from Bing will increasingly come from https://www.bing.com as opposed to http://www.bing.com.”

“With the move to encrypted search by default we will continue to pass along a referrer string so that marketers and webmasters will be able to identify traffic as coming from Bing. However, to further protect our users’ privacy, we will not include the used query terms.”

It’s great to see Microsoft moving to make HTTPS the default for its search engine, catching up with the likes of Yahoo and Google, and following in the footsteps of Wikipedia which also recently announced that it would be switching to HTTPS.

An encrypted web is a safer web. More and more websites are beginning to get the message that encryption should be the default, even for non-sensitive communications.

3 comments on “Can you spot the difference between Google, Yahoo, and Bing?”