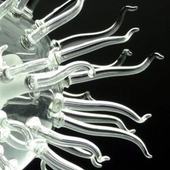 Although I have argued that computer viruses can, in some cases, be considered a form of art, malware has some way to go before it can ever compete with the natural beauty of its (sometimes deadly) biological namesakes.

And that point is brought home by the incredible work of British artist Luke Jerram, who – with the help of talented glassblowers – has created transparent and colourless jewel-like glassworks of biological viruses.

Jerram works with virologists from the University of Bristol, to design the sculptures which are about a million times larger than the real viruses, and has had them (the sculptures, not the virologists) exhibited around the world:

And here is a video of E. coli:

By the way, here’s a fascinating fact about biological viruses to enthrall your dinner party guests with: viruses have no colour.

As Jerram explains on his website, the media has been feeding us bogus images of what viruses look like all of these years by artificially adding colour:

Made to contemplate the global impact of each disease, the artworks are created as alternative representations of viruses to the artificially coloured imagery received through the media. In fact, viruses have no colour as they are smaller than the wavelength of light. By extracting the colour from the imagery and creating jewel-like beautiful sculptures in glass, a complex tension has arisen between the artworks’ beauty and what they represent.

You can see more examples of Jerram’s work on his website.

Correction: John Leyden has taken me to task:

Malaria and Giardia are both parasitic protozoa, E. coli is a bacteria. Beautiful sculptures but not of viruses.

Well, I have to put my hands up to this heinous mistake. It seems the pictures I chose to feature in the article weren’t of virus sculptures after all. However, if you check out Luke Jerram’s website you will find some *real* viruses made out of glass, including HIV, Human papillomavirus, Ebola, etc…