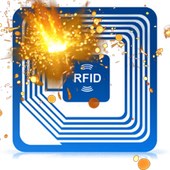 According to a recent issue of re:ID magazine, a Frankfurt man ran afoul of German authorities when they discovered that he attempted to damage the RFID chip in his government-issued identification card.

The story was originally reported in August in the Washington Post, which included videos which should convince even the most ardent privacy advocate of why microwaving an RFID card might this might be a bad idea.

Some folks have also tried boiling their passports in the hopes of damaging the RFID chip contained therein. The RFID chips inside most identity documents are only supposed to transmit when in very short range of receiving apparatus. However, many people remain concerned that the chips are more chatty than we might like.

I am a strong supporter of privacy. I have been known to play the “Who said it?” game with my friends and family, in which I offer a quote such as:

Were those the words of Benjamin Franklin, or Edward Snowden?

Yes, I am tons of fun at parties…

Our desire to balance privacy with liberty has to be tempered with methods that do not draw unnecessary attention.

This attempt at privacy reminds me of the the early days of fingerprinting.

Some criminals thought it would be a good idea to use acid on their fingertips to totally obliterate the fingerprints. (Clearly, many criminals are not very bright or safety conscious.)

Of course, few who destroyed their fingerprints didn’t really do themselves any favours. Whenever there was a crime where only smudged fingerprints were left at the scene, the authorities would simply round up the few guys who were known to have obliterated the ends of their fingers.

If you are caught even one time tampering with a government-issued identification card, you join the ranks of the very few who are known for such antics, and every trip to the airport will be a new adventure in waiting – if you are allowed to fly at all.

Rather than damaging government property (yes, any government issued identification is the government’s property, not yours), there are simple inexpensive and commercially available RFID-blocking sleeves and bags that you can use to keep RFID cards from disclosing your information.

That is probably a wiser choice than treating a passport like the chef’s special.