Business tycoon and Republican presidential candidate Donald Trump took time away this week from dealing with the major credit card breach at his chain of luxury hotels to tell the world the cell phone number of one of his political opponents.

Fellow candidate Senator Lindsey Graham had apparently upset The Donald by calling him a “jackass”, following Trump’s criticism of Senator John McCain, who Trump claims is not a war hero despite serving more than five years as a prisoner of war in Vietnam. 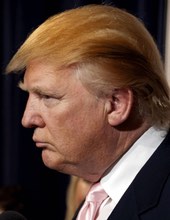 Call Donald Trump a jackass? There will be hell toupee. And so Trump told supporters Lindsey Graham’s phone number at a rally.

(Keeping up with this? It’s almost as convoluted as the Taylor Swift vs Katy Perry feud.)

I’m not sure that being called a “jackass” is a sufficient justification for a prospective presidential candidate to encourage millions of supporters to swamp his opponent’s cell phone with nuisance calls. But hey, I’m not American – and I don’t know how the political system works over there.

But Lindsay Graham, the owner of that cell phone number, clearly recognises that action needs to be taken to resolve the issue.

Presumably he has changed his mobile phone number. But he’s also made a video, where he demonstrates in slow motion how to destroy a phone in a variety of ways – all accompanied by Vivaldi’s Four Seasons.

How to Destroy Your Cell Phone With Sen. Lindsey Graham

10 comments on “If doxxed by Donald Trump, destroy your cell phone on video”