Good news: If you use Gmail in China you probably won’t have seen any spam since last Friday.

Bad news: You haven’t been able to access your legitimate email either.

It appears that the Great Firewall of China has struck another blow against freedom, blocking Chinese users from accessing their Google Mail.

A graph from Google’s Transparency Report shows a dramatic drop in people accessing Gmail from China since Friday 26 December. 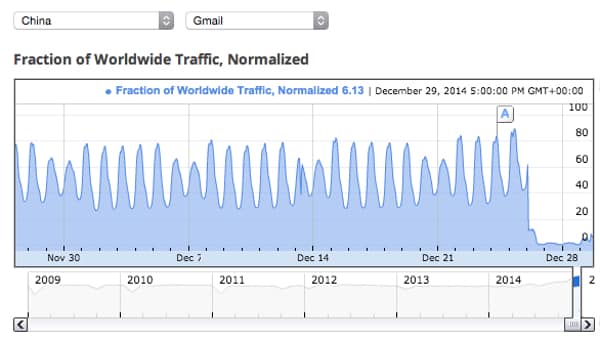 As anti-censorship group GreatFire.org demonstrates in a blog post, a simple ping request to Gmail’s SMTP server ends in a time-out failure because the service has been made inaccessible from China.

There has been no official claim of responsibility for the sudden outage from the Chinese government, but a Google spokesperson was quick to confirm to the media that the problem wasn’t Google’s fault:

“We’ve checked and there’s nothing wrong on our end”

Mainland China, of course, has had a troubled relationship with Google.

Nobody is likely to forget Operation Aurora, which saw Google and other technology companies allege that they had been attacked by Chinese hackers targeting human rights activists.

In response, Google threatened to pull out of the country.

And, more recently, in the run-up to the 25th anniversary of the Tiananmen Square massacre, China cut off access to Gmail, Google Calendar and Google Search, as a form of information control.

But despite this latest attempt to disrupt access to Google’s services there was a workaround for determined Gmail users who could still access their email through apps like Apple Mail, Microsoft Outlook, and Apple iPhone’s Mail which use POP, SMTP, and IMAP rather than the conventional web interface. Access to services via this method was, reportedly, somewhat hit and miss.

Now, however, even that workaround has been shut off.

It appears that the only solution now is for China-based internet users to choose another email service (let’s hope that it respects the users’ privacy) or find a Virtual Private Network (VPN) that can circumvent the Great Firewall of China, and allow unhindered access to censored websites and services.

Online life just got harder for residents of China who relied upon Google’s services to communicate with the outside world, and those travelling to the country for business or pleasure.