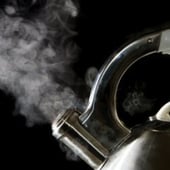 If media reports from St Petersburg, Russia, are to be believed, a batch of Chinese kettles have been intercepted on their way into the country – which had the ability to do much more than just boil water.

As the BBC explains, the kettles had secretly embedded within them a “little microphone”, and chips which allowed the rogue household goods to connect to computers using unprotected WiFi networks within a 200m radius, and send data back to remote servers.

Other goods which are said to have been bugged include mobile phones and the cameras that Russian drivers seem to love sticking on their car dashboards.

It all seems to me like a very bizarre story – but is it true? I have no idea. For now, I think it would be safest to say that the jury is out.

It’s always possible that something has been “lost in translation”, assumptions made and the truth will only be known if independent technology experts get the chance to examine the offending kettles and determine what they can really do.

But, if it *is* true, you might want to switch to a glass of sparkling water rather than a hot cup of tea in future.

2 comments on “Chinese kettles accused of spying, sending data back to remote servers”