“Claim your Free $500 Costco Voucher Now. Only a few left” is the message you might have seen posted by one of your Facebook friends, but don’t be too quick to believe it.

Yes, the messages may well have been genuinely posted by your friends, but that’s because they were duped by the “Official Costco promotion” into thinking that if they jumped through various hoops (such as sharing the scam promotion with their online pals) that they themselves would receive a $500 gift voucher.

If your wallet is feeling a little light and you’re strapped for cash, it’s understandable that you might get excited if a company like Costco appears to be offering you a $500 gift voucher. But that doesn’t mean you should throw all good judgement out of the window at the same time.

The webpage tells you that the Costco gift vouchers are in short supply, as a further encouragement for you to act quickly rather than think about what you are doing. The campaign isn’t really endorsed by Costco, of course, and you aren’t ever going to receive that $500 Costco gift voucher. Instead, the scammers behind it are hoping to direct traffic to websites hosting online surveys, which will in turn earn them affiliate commission.

It turns out that there are plenty of dubious Facebook pages offering bogus Costco gift cards, some of which have managed to generate thousands of “fans”. 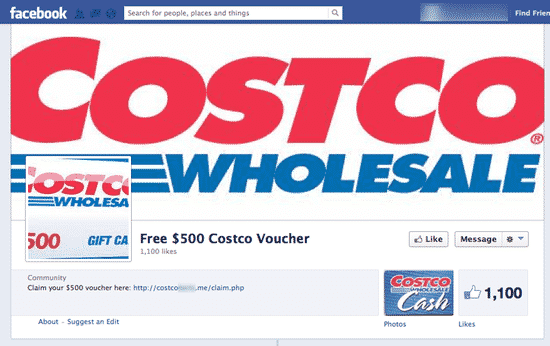 And it seems there’s an endless stream of people willing to re-share and “Like” these pages as bogus $500 Costco gift cards are offered in different variations of the scam.

One of the examples pictured below, for instance, has over 13,000 shares and a mind-boggling 4,500+ Facebook users have been duped into leaving a comment on what they plan to spend their $500 gift voucher on. The real Costco Facebook page does encourage its many fans to re-share its posts and “Like” the opening of new stores. That’s quite reasonable. Most brands engage in that activity as part of their promotion via social media.

But it’s very different to fraudulently offering thousands of social networking users $500 gift voucher cards. If the offer were real, wouldn’t it be promoted on the real Costco Facebook page?

If you are on Facebook, and want to be kept up-to-date on the latest scams and threats, as well as tips on how to protect yourself online, join the Graham Cluley Security News Facebook page.