Visitors to the website donaldjtrump.com were not greeted with the normal calls for campaign contributions or offers of Trump-related merchandise, but instead a message which parodied the look of those typically used when the FBI seizes control of servers operated by cybercriminals. 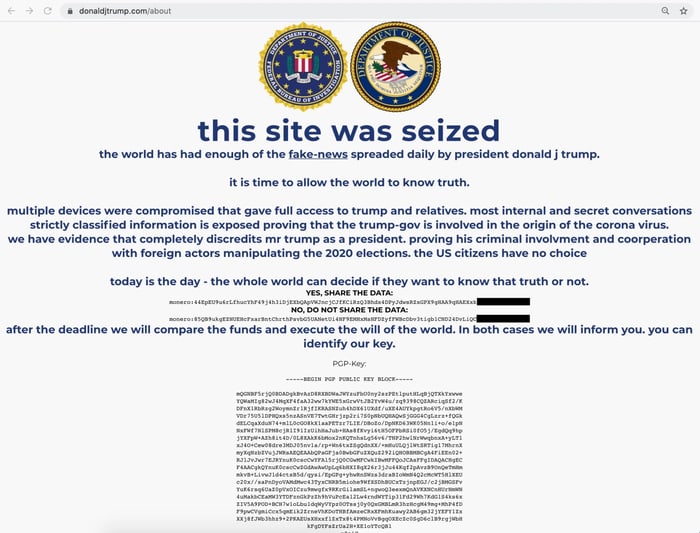 this site was seized

the world has had enough of the fake-news spreaded daily by president donald j trump.

it is time to allow the world to know the truth.

multiple devices were compromised that gave full access to trump and relatives. most internal and secret conversations strictly classified information is exposed proving that trump-gov is involved in the origin of the corona virus. we have evidence that completely discredits mr trump as a president, proving his criminal involvement and coorperation with foreign actors manipulating the 2020 elections. the US citizens have no choice

today is the day – the whole world can decide if they want to know that truth or not.

NO, DO NOT SHARE THE DATA:
<monero wallet address>

after the deadline we will compare the funds and execute the will of the world. In both cases we will inform you. you can identify our key.

The website was cleaned-up about half-an-hour later, and according to a tweet from the re-election campaign’s director of communications no sensitive data was exposed by the security breach.

Earlier this evening, the Trump campaign website was defaced and we are working with law enforcement authorities to investigate the source of the attack. There was no exposure to sensitive data because none of it is actually stored on the site. The website has been restored.

Nonetheless, clearly somebody didn’t have adequate security in place to prevent the hackers from making the unauthorised change to the website. The chances of the hackers making any money from their ambitious scam was perhaps remote, but they might have just as easily have planted malicious code onto the website without drawing attention to themselves.

Those administering the donaldjtrump.com website might count their blessings that the attack did not have more malicious intent.

Law enforcement agencies have been informed of the incident, and are – no doubt – looking for a hacker sitting in their bedroom, weighing 400lb.

Earlier this month, Donald Trump informed his fans at a rally that “Nobody gets hacked. To get hacked you need somebody with 197 IQ and he needs about 15 percent of your password.”