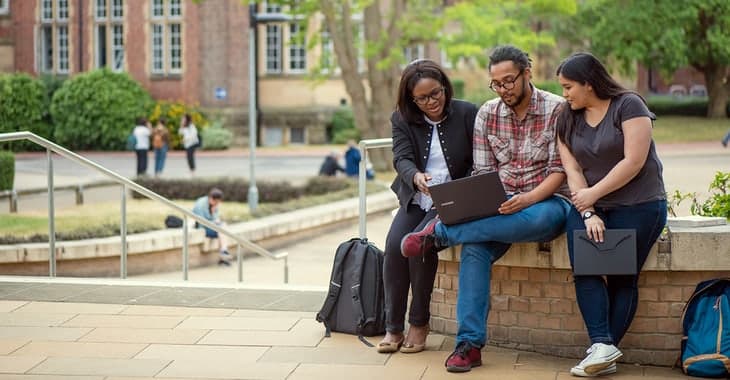 Students at the University of Southampton got a surprise in their inbox on Sunday – an email from “The Vice Chancellor” claiming that the university would be imminently closing at the request of the UK Prime Minister, due to the economic consequences of Brexit.

Concerned students were reassured, however, that they would be rehoused at “a far superior univeisity” (sic), the nearby Solent University.

This was far from the only spelling mistake the supposed Vice Chancellor made in his communication to students. 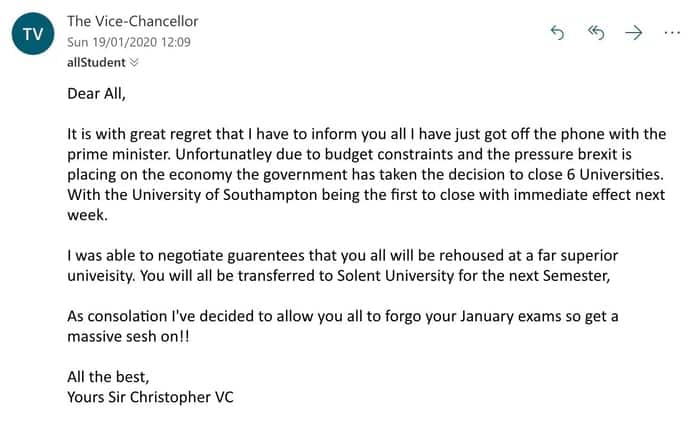 It is with great regret that I have to inform you all I have just got off the phone with the prime minister. Unfortunatley due to budget constraints and the pressure brexit is placing on the economy the government has taken the decision to close 6 Universities. With the University of Southampton being the first to close with immediate effect next week.

I was able to negotiate guarentees that you all vvill be rehoused at a far superior univeisity. You will all be transferred to Solent University for the next Semester,

As consolation I’ve decided to allow you all to forgo your January exams so get a massive sesh on!!

The email claimed to be signed by Vice Chancellor Sir Christopher Snowden.

Which is in itself odd, not only because you would expect his spelling to be better – but also because Sir Christopher retired as the university’s Vice Chancellor in 2019, and was replaced by Professor Mark E Smith.

Clearly whoever sent this mischievous email hasn’t been doing his homework.

Student newspaper The Tab reports that the clearly bogus message has since been removed from students’ inboxes.

A spokesperson from Southampton University confirmed to The Tab that the email was fraudulent:

“We want to reassure all of our students that this email is fake. It was not sent by the Vice-Chancellor and did not come from his personal account. “The information it contains is completely false and should be disregarded. The University is open and operating as normal.”

“The University is treating the matter seriously. Our iSolutions team are working to track down the source of this e-mail and appropriate action will be taken.”

Clearly the contents of the email were unlikely to be taken seriously by anyone who managed to pass the University’s entrance qualifications, but there clearly are questions to be asked about how easy it was for someone to send a blanket email to all students without authorisation.

Whatever the nature of your organisation you would be wise to tightly control who can access mailing lists, and ensure that only authorised users are able to send blanket emails.

Exams or no exams, I think we can all drink to that.