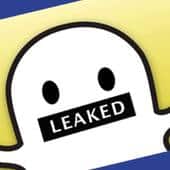 Facebook pages claiming to link to leaked photos distributed via the Snapchat smartphone app can be attempting to steal your passwords, according to one security researcher.

Snapchat, you will remember, is the smartphone app that allows you to send a photograph or video to an acquaintance.

The app’s gimmick is that the snap is only supposed to be viewable for a few seconds before it is destroyed. But, as I explained last year, it doesn’t actually prevent the recipient from making a digital copy.

Regardless, you can imagine just how many young people have used the app for sexting, without thought of the possible embarrassing and humiliating consequences.

It’s no surprise then to discover that a number of unsavoury Facebook pages have sprung up, publishing candid and salacious Snapchat photos of young people in compromising positions, gathering thousands of fans in the process.

Security researcher Troy Hunt found one such Facebook page, and discovered that it was driving traffic to a page designed to phish usernames and passwords from Facebook users. The good news is that Troy reports that this particular Facebook page has now been taken down by the site’s security team.

However, a casual search of the social network found numerous other pages that claim to offer leaked Snapchat pics, and it would be no surprise if they are using the lure of candid photos that were supposed to have remained private as bait to build an audience of thousands of fans with the intention of later abusing their trust.

Troy sums up the situation well in his blog post:

In my opinion, it’s a shame that Facebook isn’t more proactive in policing offensive and dangerous pages on its network, as they spring up at an alarming rate.