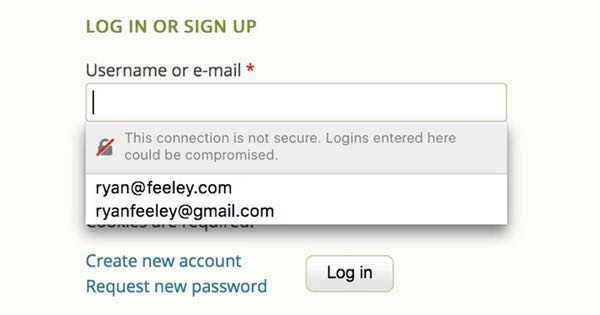 Mozilla has released Firefox 52, the latest incarnation of its web browser.

Most of you probably don’t realise that that’s happened, because most of you are using Google Chrome as your browser. Or, if you’re on an iPhone or iPad, you’re probably using the mobile edition of Apple Safari.

But for those of you who relish using an alternative web browser, this is an important Firefox update.

As well as patching dozens of security vulnerabilities, Firefox 52 takes a leaf out of Google Chrome’s book and now warns if you attempt to enter sensitive information into forms on unencrypted HTTP websites.

You’re most likely to see Firefox’s warning message if you try to type your password onto a webpage that is not secured with HTTPS.

This connection is not secure. Logins entered here could be compromised.

You then have a choice.

You can either attempt to contact the webmaster of the site you are attempting to log into, whack them around the head with a rusty mackerel, and then ask them to join the rest of us in the 21st century.

Or you could turn a blind eye to your web browser’s palpitations about being asked to enter sensitive credentials on an insecure form and go ahead regardless.

Fortunately, more and more websites are recognising the benefits of switching to HTTPS – making life harder for computer criminals eager to eavesdrop on your password – but we’ve still a long way to go.