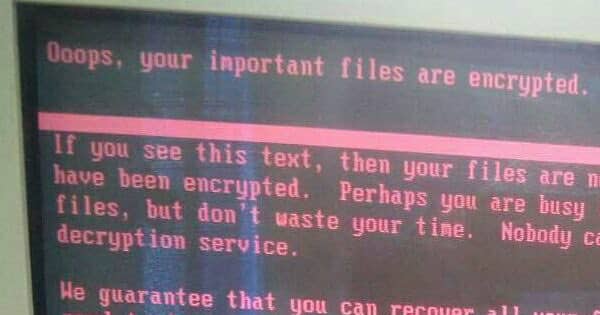 There are multiple reports from countries around the world that their computers have been hit by ransomware.

Part of the ransom message reads as follows, in red letters on a black background:

Ooops, your important files are encrypted.

We guarantee that you can recover all your files safely and easily. All you need to do is submit the payment and purchase the decryption key. 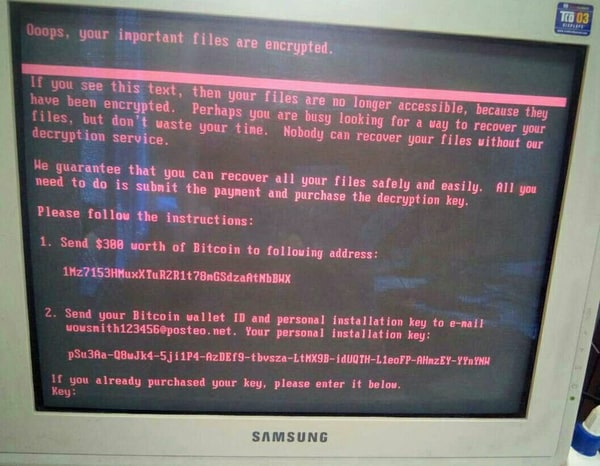 Security experts have confirmed that the ransomware, named by various anti-virus firms as NotPetya, Petrwap, or a variant of Petya, is spreading in part through the exploitation of an NSA-built Windows-based SMB exploit known as “Eternal Blue”. 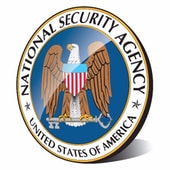 Eternal Blue was developed by the United States’ National Security Agency for the purpose of infecting the computers of those it wished to spy upon. As a consequence, the NSA didn’t tell Microsoft about the vulnerability it had discovered in Windows *until* details were stolen from the agency by a mysterious group of hackers known as the Shadow Brokers.

The fact that the NSA initially hoarded details of the security holes in Microsoft’s code has put organisations around the world at risk.

Eternal Blue was a key part of how the WannaCry ransomware spread so quickly earlier this year, and *has* now been patched by Microsoft for some months. Clearly, however, many organisations have still failed to put those security patches in place.

The malware attempts to gain administrator access on infected computers, scouring memory for domain admin credentials and looking for other systems to infect in the organisation.

Some of the earliest reports of affected computers came from government offices and energy companies in Ukraine, as well as the airport of the country’s capital Kiev where BBC News reports that flights may be delayed as a consequence.

Meanwhile, the media inevitably ran chilling headlines about the fact that the infamous Chernobyl nuclear power plant was counted amongst the victims of the ransomware attack, disrupting the site’s automatic radiation monitoring systems. 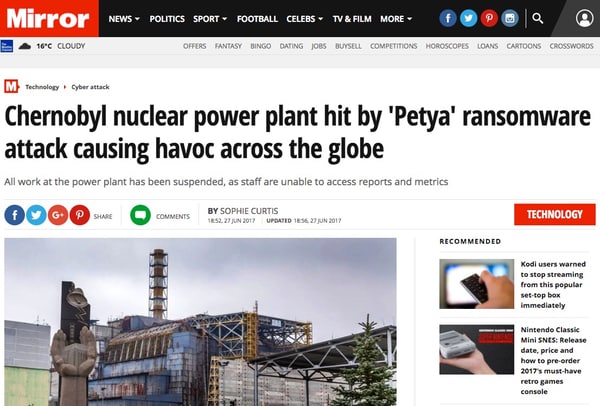 Some, however, didn’t seem too flustered.

For instance, Pavlo Rozenko, deputy prime minister of Ukraine, tweeted a photograph of his computer – seemingly mid-way through being encrypted by the ransomware. 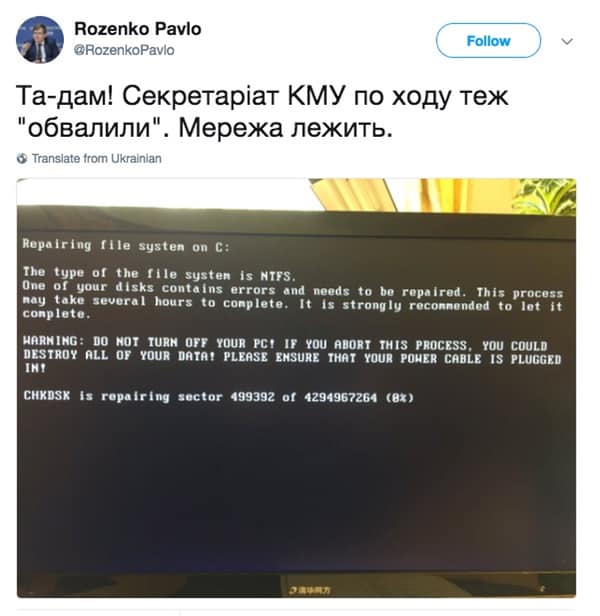 “Ta-daaa! Network is down at the Cabinet of Minister’s secretariat.”

However, it’s incorrect to think that the attack limited itself to Ukraine.

For instance, there have been additional reports that the Spanish offices of multinational companies such as law firm DLA Piper have been hit by a malware attack that is encrypting files on their computers and demanding a ransom of US $300 in Bitcoin be paid to the extortionists.

Meanwhile marketing giant WPP says that several of its companies have suffered as a result of a “suspected cyber attack”.

Other victims include Maersk, the international shipping logistics company, which confirmed via Twitter that it had fallen victim to a cyber attack. 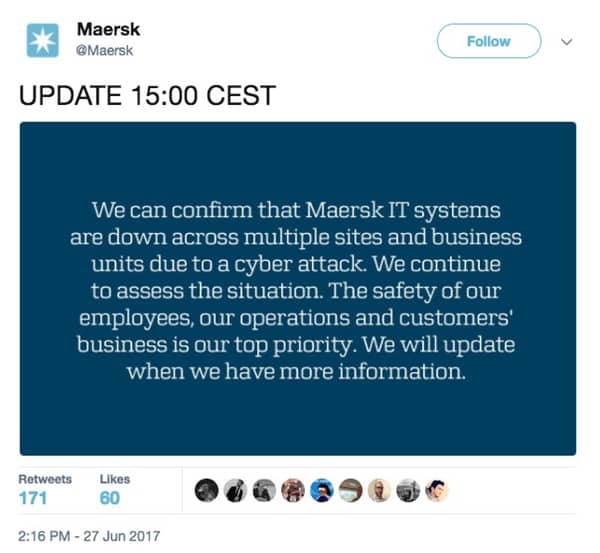 There have also been reports of infections in Russia, India and the UK, and it seems unlikely that that will be the end of it.

Hey folks, just wanted to check on something…

You did do backups, right? pic.twitter.com/QeO3N7vtHN

Finally, a big question you’re likely to have if you were unlucky enough to have fallen victim to this ransomware attack: should you pay the ransom?

The answer to that is unequivocally “no.” Even if you get past the ethical debate of paying money to extortionists, it’s worth bearing in mind that email service Posteo has blocked an email address being used by the criminals – meaning that you can no longer get in contact with them, and they can’t get back to you.

Whether that was a sensible action by Posteo is, of course, open to debate… One hopes that it was at least done after consulting with law enforcement agencies.

For more discussion of this topic be sure to listen to this episode of the “Smashing Security” podcast:

Smashing Security #031: 'Petya (don't know the name of this ransomware)'