Thanks to those folks who have been in touch today and last Friday, letting me know that Gmail was flagging my daily “GCHQ” newsletter as suspicious. 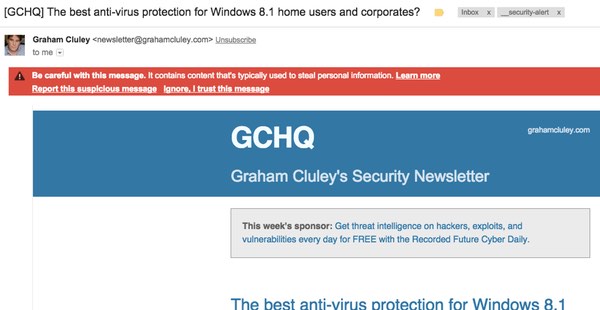 Not everyone appears to have experienced the problem, but some subscribers have reported that Gmail put up a big red banner at the top of the email, warning that “it contains content that’s typically used to steal personal information”.

That may have resulted in some of you believing that my mailing list had been compromised, or I had sent out a dodgy link.

Fortunately neither of those scenarios are the truth. :)

Instead, what I believe is happening is that Google’s email filters are false alarming on a link to a story I wrote – for the Bitdefender Hot for Security blog – about the conviction of a man who hacked a lottery in an attempt to win $14.3 million.

I suspect in Gmail’s eyes the combination of words “lottery”, “win $14.3 million”, etc.. were too much for it to take, and it got its knickers in a twist and decided to err on the side of caution, warning readers that there might be bad stuff in my newsletter.

If you received the warning from Gmail, please help it learn that my newsletter is okay by clicking the “Ignore, I trust this message” link. Thanks!

Interestingly, I’ve received similar reports that the newsletter of my former stomping ground Sophos Naked Security was similarly mislabelled by Gmail – presumably because they were also talking about the lottery story.

In Naked Security’s case it may have been worse than I experienced, as it looks like the emails may actually have been tagged as spam – which isn’t (as far as I know) a fate which befell my newsletter.

Oh, and if you haven’t already done so and feel like you’re missing out on all the fun, sign up for my free GCHQ Newsletter today. ;-)