This weekend, someone posted an offensive rape ‘joke’ on the official Facebook page of the Hooters restaurant chain: 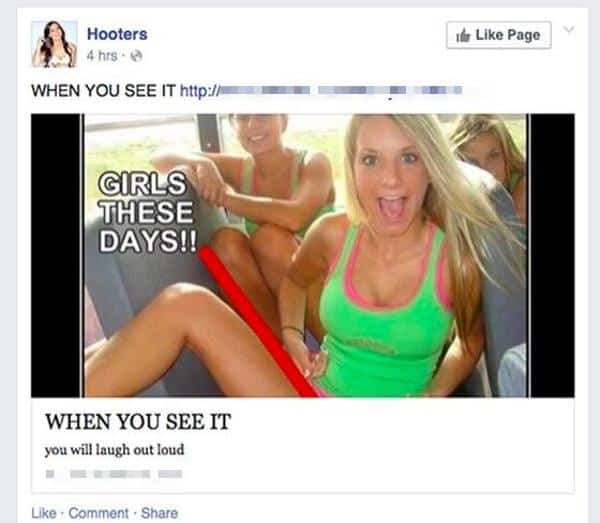 The full image shows a woman pointing procatively at her nether regions, her legs wide akimbo, with a caption beneath reading:

EXHIBIT A The proof that she was asking for it your Honour.

According to a subsequent Facebook post by Hooters, who received quite a lot of criticism for the post from the online community, a hacker was to blame: 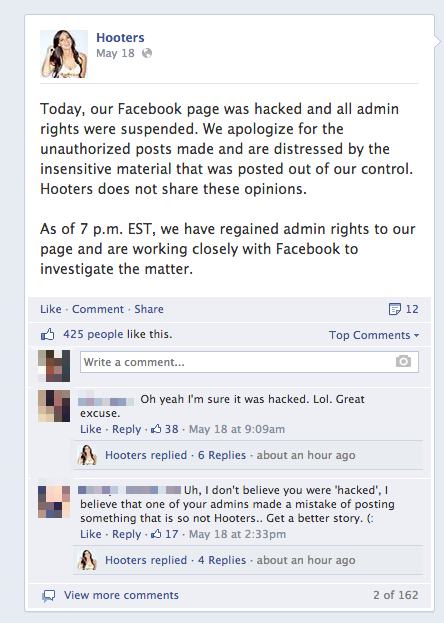 Today, our Facebook page was hacked and all admin rights were suspended. We apologize for the unauthorized posts made and are distressed by the insensitive material that was posted out of our control. Hooters does not share these opinions.

As of 7 p.m. EST, we have regained admin rights to our page and are working closely with Facebook to investigate the matter.

That seems odd to me.

If I was a hacker and had access to a corporate brand’s Facebook page with over 2.6 million fans, I’m not sure that I would post something as tepid (albeit highly offensive) as that rape joke.

Wouldn’t it be more worth my while posting a malicious link to a webpage that was hosting spyware that could make me money, or attempt to phish login credentials from unsuspecting users?

I wonder if Hooters has considered the possibility that one of its Facebook page’s administrators made an error of judgement, and perhaps carelessly clicked on a link that reshared itself via the Hooters page, sharing itself with the many fans of cheap fried chicken?

Admittedly, it’s harder to tell than normal what’s going on in this case because scrolling back through the Hooters Facebook page it’s normal activity does seem to consist of regular servings of bosomy, scantily-clad waitresses wearing tight-fitting Hooters t-shirts.

Hardly the most classy part of Facebook at the best of times.

I don’t know whether Hooters genuinely had its Facebook page hacked or not, but I’m only too aware that more and more brands and celebrities have used the “we were hacked” excuse when sometimes the fault can lie much closer to home.