If you believed some of the news headlines, you would think that Microsoft has announced the death of Internet Explorer. 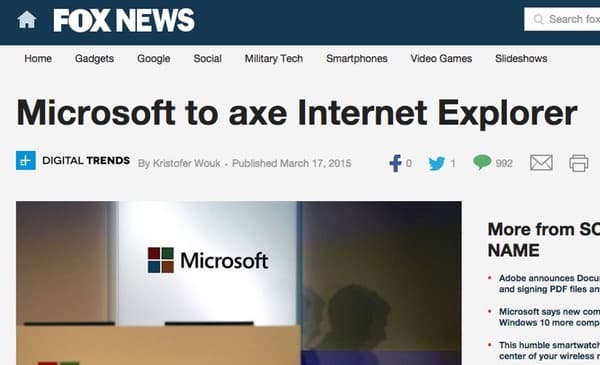 But read a little deeper, and you’ll find that all Microsoft has said is that it is working on a new brand name for the next incarnation of the web browser it bundles with Windows, codenamed Project Spartan.

If Internet Explorer lives on at all in Windows 10, it seems it will be for enterprises who have legacy requirements such as custom ActiveX controls. And most of the time you’ll be pushed to use “Project Spartan” – which has different innards – instead.

But I can well understand Microsoft wanting to move away from the name “Internet Explorer”. 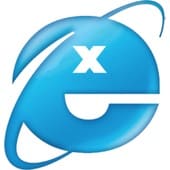 It’s a brand that has been tarnished by a horrendous history of security holes, and anytime you speak to a web designer they’re likely to show you the IE-shaped indentation on their forehead from the hours they have spent smacking their head into brick walls trying to get old versions of the browser to render their webpages correctly.

We all remember the painful extended death of Internet Explorer 6, where Microsoft resorted to publishing adverts trying to convince the public how terrible it was, and how important it was to dump it.

And there are even webpages like www.ie8.rip, which will count down the days until the death of Internet Explorer 8.

In recent years, the once-dominant Internet Explorer has stumbled allowing Google Chrome to grab the title of world’s most popular desktop web browser.

So, it’s against that backdrop that Microsoft is looking for a new name.

I stumbled across a couple of names that Microsoft might want to consider: Windscale. The worst nuclear accident in UK’s history happened in October 1957, when a fire broke out at the nuclear reactor site at Windscale, releasing radioactive contamination across the UK and Europe.

Perhaps unsurprisingly, the name “Windscale” hasn’t managed to find a place in the nation’s bosom in the last 50+ years, and the site was rebranded “Sellafield” in 1981.

Which means the name is up for grabs if Microsoft wants it.

Exxon Valdez. In 1989, the Exxon Valdez spilled tens of millions of gallons of fuel off the coast of Alaska, devastating 25,000 square kilometres of coastline and ocean.

You may wonder, what ever happened to the Exxon Valdez? Well, first the 987-foot-long supertanker was renamed the Sea River Mediterranean, before being sold onto a Hong Kong-based shipping company in 2008 who renamed it the Dong Fang Ocean.

In November 2010, the Dong Fang Ocean collided with a cargo ship in the South China Sea, and was subsequently sold for scrap.

A sad end for the Exxon Valdez, but if Microsoft was willing the name could live on if they chose to pinch it for Project Spartan.

If you’re curious what Project Spartan looks like (and it is quite spartan) check out this video of Microsoft giving a sneak preview in January:

Will Spartan (or whatever Microsoft ends up calling it) manage to snatch back marketshare from competitors such as Google Chrome? Only time will tell…

3 comments on “Internet Explorer is dead. Long live… umm… How about some of these names?”