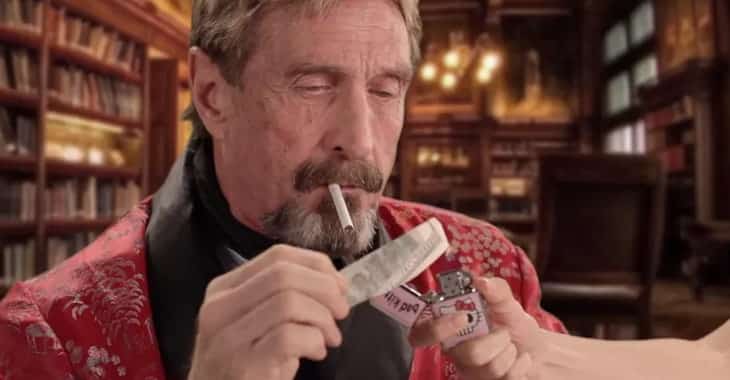 Anti-virus veteran John McAfee has been arrested in Spain on US tax evasion charges.

McAfee, who founded the anti-virus company of the same name but has had nothing to do with it since the 1990s, has kept in the news in recent years by…

…saying he would socially engineer a corpse to find out an iPhone passcode… and much more besides.

In recent years, however, he seems to have put a lot of effort into promoting cryptocurrencies and ICOs on Twitter.

And that seems to have got John McAfee into a little bit of bother with the US Department of Justice, who today unsealed an indictment against him.

According to the indictment, McAfee earned millions promoting cryptocurrencies, giving talks, and even selling his life-story rights to documentary makers. However, the authorities claim that between 2014 and 2018, McAfee failed to file tax returns related to these earnings.

More details of the alleged tax evasion can be found in a 55-page complaint filed by the SEC:

John McAfee is currently being held at an undisclosed location in Spain.

It’s the just the latest chapter in the entirely barmy life of John McAfee.