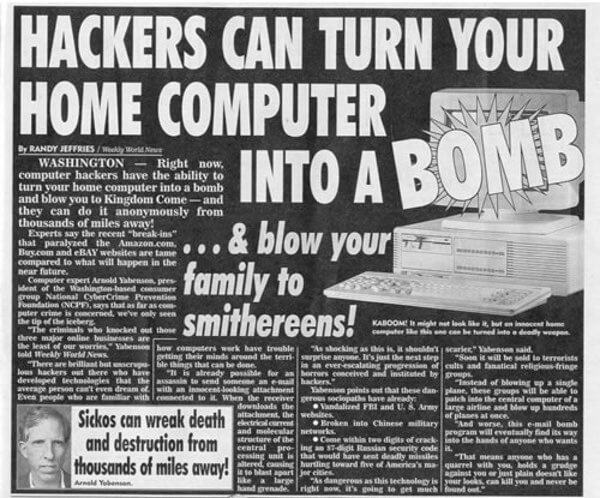 Hackers can turn your home computer into a bomb… and blow your family to smithereens!

Of course, no serious newspaper would ever resort to such ridiculous scaremongering.

In unrelated news, here is a report from today’s Daily Mail: 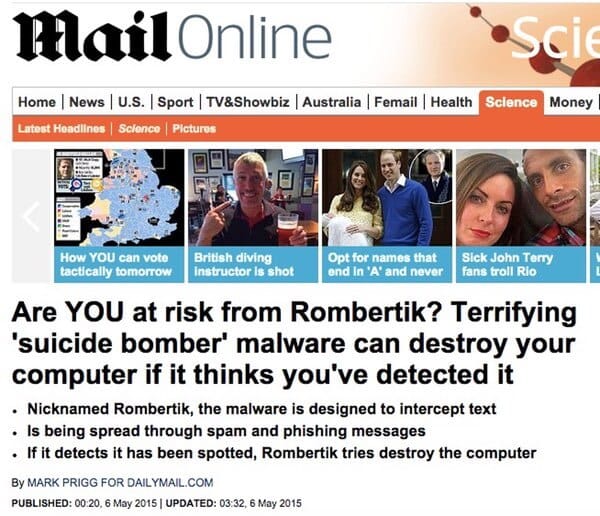 Are YOU at risk from Rombertik? Terrifying ‘suicide bomber’ malware can destroy your computer if it thinks you’ve detected it

My, how times have changed…

If you want to read something a little more thoughtful about the Rombertik malware threat, then check out the blog post from Cisco’s researchers, although it’s not perfect.

In that blog post you’ll find that Rombertik is hardly a “suicide bomber” and the chances of it activating its destructive payload on a regular user’s computer is minimal. 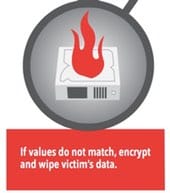 The fact that it attempts to notice if it is being analysed by anti-virus researchers and their tools is not in itself unusual, but even then it doesn’t destroy your computer.

What it does try to do, if it believes it is under analysis, is wipe out your hard drive’s partition sector (also known as the MBR or Master Boot Record) and force a restart. If it’s unable to do that it will attempt to encrypt the files in your home folder.

It’s unfortunate, I feel, that both Cisco researchers and the Daily Mail describe the malware’s behaviour as “destroying the computer”, when in fact we’re talking about data being wiped or overwritten on a hard drive.

Maybe some of the hype and hysteria would have been avoided if Cisco had been more careful with its words. And maybe it was unwise for the company to create an infographic which showed a hard drive catching fire.

Perhaps more people than I imagined have been reading back issues of the Weekly World News.

If you’re worried about the Rombertik malware threat, here’s my advice. It’s no different from the advice I would offer for reducing the chance of infection by virtually all malware:

Keep your anti-virus updated, make sure you are protected with the latest security patches, and be wary of opening unsolicited email attachments or clicking on unknown links. If you combine that with a layered defence you’re going a long way to reducing the threat.

There, if only real suicide bombing was as easy to prevent.

7 comments on “Malware suicide-bombing, as described by the Daily Mail and Weekly World News”