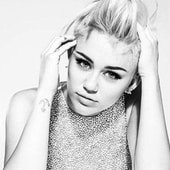 Calm down everyone, Miley Cyrus has not committed suicide.

By all accounts, she’s alive and well. Well, she’s as “well” as Miley Cyrus ever is.

Her career, however, may have taken a turn for the worse after she brought the word “twerking” to the world’s attention after her ill-considered performance at the MTV Video Music Awards.

That hasn’t stopped many people on social networks worrying that the young starlet has killed herself, in response to the overwhelmingly negative reaction to her salacious dance routine. The concerns have been raised by messages like the following which have been shared across the likes of Facebook and Twitter. 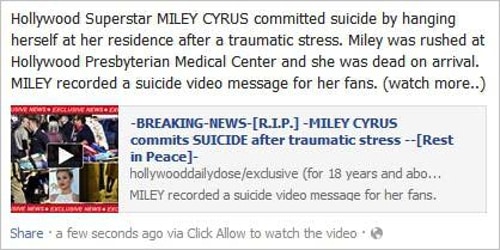 Part of the message reads:

Hollywood Superstar MILEY CYRUS committed suicide by hanging herself at her residence after a traumatic stress. Miley was rushed at Hollywood Presbyterian Medical Center and she was dead on arrival. MILEY recored a suicide video message for her fans. (watch more..)

As About.com points out, messages like this are spread by rogue Facebook applications which have managed to dupe your friends and family into giving them access to their social networking accounts.

Clicking on links contained inside the message (which appear to be currently unavailable) is a bad idea, as you may end up having your own Facebook account compromised. Typically hijacked accounts will be used for spreading revenue-generating spam, such as links to survey scams.