Following an attack on his cargo-ship by an army of homicidal beechwood armchairs Jacaranda Jim is forced to crashland on the strange world of Ibberspleen IV. Rescued from the burning wreckage by the mysteriously smug Alan the Gribbley, Jim has to do battle with manic-depressive deckchair attendants, the Ibberspleen Post Office and a very sinister network of dank caves.

All this, and more, is revealed in Jacaranda Jim.

NOTE: If you have a modern version of Windows, it may not support 16-bit DOS programs. Some game players have reported having good results by using free DOS emulators like vDOS, DOSBox or Boxer. 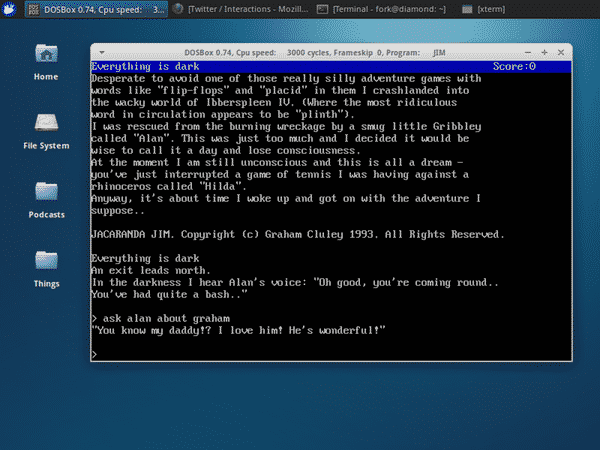 Another note: This version says it is still shareware. Trust me – Jim is now in the public domain and free. I don’t sell or support it any longer. See elsewhere on this page for more information.

You will need to decompress the file using an unzipping tool like those available from WinZip.

Originally “Jacaranda Jim” was a shareware game, which required players to register to get access to maps and online hints. In May 1997 I placed Jacaranda Jim in the public domain, so I have made publicly available the online hints. Unzip the file in the same directory as Jacaranda Jim to enable the hints facility. Whenever you get stuck during the game just enter “HINT” at the prompt.

BEWARE! This file can seriously damage your enjoyment of the game. It’s much more fun to try and work out how to complete Jacaranda Jim on your own. You have been warned.

Jacaranda Jim was first written in about 1987 whilst I was studying at Guildford College of Technology in the UK. Originally it was written on the PRIME minicomputer under the name “Derek the Troll” (Derek was the character who was eventually named Alan the Gribbley).

Derek was named after a lecturer who gave the accountancy module of the computer course I was taking – the lecturers didn’t take kindly to me lampooning a lecturer, and so Derek was renamed Alan the Gribbley (the “real” Alan was a mature student on the course with a ghastly beard who always carried a copy of PC Tools around with him). Of course, Alan the Gribbley still had sprinklings of accountancy about him – and can often be heard muttering the magic word “invoices”.

During my time at Guildford I was introduced to the IBM PC for the first time, and the game was ported (and further developed) on that platform.

I no longer sell or support Jacaranda Jim or my other adventure game, Humbug. I have placed both in the public domain – so feel free to play them as much as you like, and copy them here, there and everywhere.

I hope you get as much fun from playing the games as I did writing them all those years ago.

P.S. You must remember that I wrote these games a very long time ago, and I don’t really remember the solutions. So it’s not usually worthwhile emailing me asking questions about them! :) Fortunately other people on the net have worked out the full solutions if you’re desperate.

P.P.S If you like Jacaranda Jim, you’ll probably enjoy Humbug even more.