Nick Griffin, for those of you who aren’t aware, is the leader of the extremely right-wing British National Party (BNP).

As you can imagine, he has his fair share of enemies.

Not only has a hacker changed Nick Griffin’s Twitter profile to suggest he is a leading light in other organisations not traditionally supported by the BNP:

The attacker has also posted a series of tweets over the long British holiday weekend which – depending on your political viewpoint – you may consider either more or less offensive than Nick Griffin’s normal pronouncements. 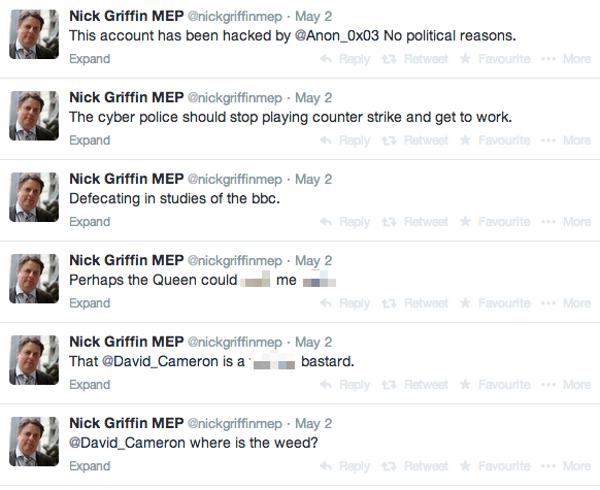 According to a conversation on Twitter between the hacked account and a bemused follower, Nick Griffin’s mistake was to use the same password in multiple places.

As I’ve explained many times before, you should never re-use passwords.

If you do, you could suffer the same fate as Nick Griffin – with multiple accounts compromised and your personal information and communications rifled through by unauthorised parties.

Passwords should be unique, hard to crack and impossible to guess. The smart approach is to use password management software like Bitwarden, 1Password, and KeePass to make them both safer and easier to remember.

A hacker calling themselves Anon_0x03 has claimed responsibility for the defacement, and at the time of writing, appears to still be in control of Nick Griffin’s Twitter account.

Update: Softpedia reports that the Twitter account of Griffin’s party, the BNP, has also been hacked. Same password? Frankly, you’d be bold to bet against that.