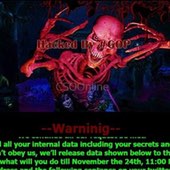 Remember the “Guardians of the Peace”?

They are the hackers who compromised the computer systems of Sony Pictures last year.

In their attack they displayed ghoulish skulls on employee’s screens and stole terabytes of email archives containing details of what executives really thought of Angelina Jolie, and the pseudonyms stars use when they booked into hotels.

Nobody died, no cities were destroyed.

But still, it was all pretty embarrassing for Sony, which – to be honest – has had a long history of being humiliated by hackers.

And, naturally, the hack caught the attention of the media – which speculated that the attack might be connected to a Sony Pictures comedy about the assassination of Kim Jong-un.

The White House certainly seemed convinced of the hackers’ connection to North Korea (despite the skepticism of some in the computer security industry), and within days of the hack making worldwide headlines announced that it had evidence that Pyongyang was behind the attack, and imposed sanctions.

But, it turns out, not that serious at all. Because at the end of last week a BBC News report reported a defector’s claims that North Korean hackers “could kill”. 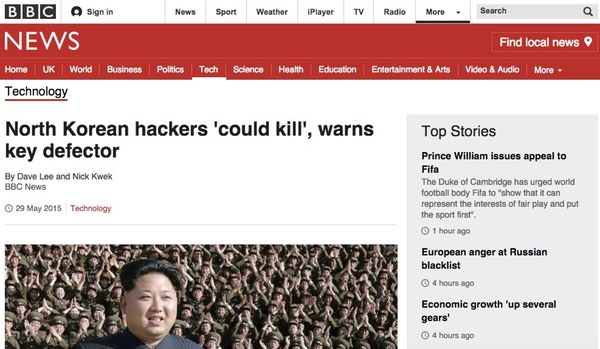 I don’t know how large North Korea’s military budget is, but considering its tense relationship with South Korea I am amazed that such a large proportion would be spent on a hacking unit.

But then, Professor Kim paints a picture of North Korea’s apocalyptic cyberwarfare capabailities:

“The size of the cyber-attack agency has increased significantly, and now has approximately 6,000 people,” he said.

He estimated that between 10% to 20% of the regime’s military budget is being spent on online operations.

“Their cyber-attacks could have similar impacts as military attacks, killing people and destroying cities.”

Remember when the Daily Mail ran a story entitled “How a North Korean cyber attack could cripple Britain: Jets falling from the sky. Drinking water poisoned. Nuclear reactors ablaze. With chilling realism, a war historian imagines what would happen”?

I have no doubt that North Korea, like many countries around the world, has military cyber-attack capabilities.

For instance, I wouldn’t be surprised if North Korea was investing resources in attacks like Stuxnet (a notorious piece of malware, launched by the United States and Israel to disrupt an Iranian nuclear facility).

Coincidentally, just last week reports came out that America had attempted – and failed – in a plot to meddle with North Korea’s nuclear programme through a Stuxnet-like attack.

But there’s a big difference between that and “destroying cities”.