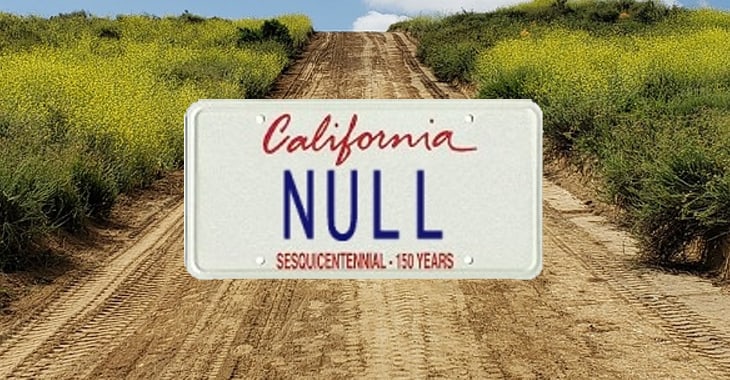 A US security researcher called Droogie thought he’d come up with the perfect wheeze to avoid being fined by the Department of Motor Vehicles (DMV) – he bought a personalised license plate which we believed would mess with the DMV’s database.

The hacker’s hope was that using “NULL”, the marker to signify data that doesn’t exist in an SQL database, he’d avoid receiving any tickets.

Telling the story at DEF CON in Las Vegas, Droogie remembered that he thought he had duped the system and was flipping the bird at the authorities:

First, Droogie got a parking ticket, incurred for an actual parking infraction—so much for being invisible. Then, once a particular database of outstanding tickets had associated the license plate NULL with his address, it sent him every other ticket that lacked a real plate. The total came to $12,049 worth of tickets. Droogie told the DEF CON audience that he received little sympathy from either the California DMV or the Los Angeles Police Department, both telling him to just change his plate to something else. That remains something he refuses to do.

Although the initial $12,000-worth of fines were removed, the private company that administers the database didn’t fix the issue and new NULL tickets are still showing up.

With neither the database administrators or Droogie (I wonder if his real name is Bobby Tables?) prepared to budge, my guess is he’s going to carry on receiving parking tickets intended for other car owners for some time to come…

10 comments on ““NULL” vanity plate hack to dodge parking tickets backfires to the tune of $12,000”