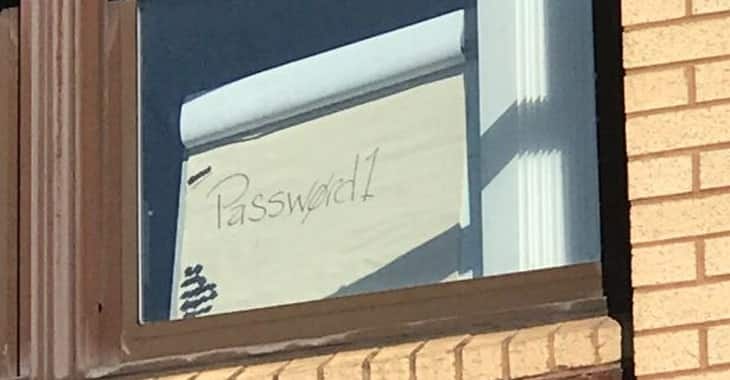 The Plymouth Herald reports on what appears to be an easy-to-avoid gaffe.

An eagle-eyed passer-by spotted a password on clear display at Her Majesty’s Passport Office in Ebrington Street, scrawled on a flipchart leaning against an upper window. Of course, with modern smartphone technology it’s not hard for anyone to read a password written so large on a flipchart even if it is high up.

Okay, so they’ve taken possibly the world’s worst password, capitalised the first letter, changed an ‘o’ to a zero, and added a digit on the end, but err… that’s pretty pitiful.

The Plymouth Herald contacted the UK Home Office to ask them about the incident, and a rather exasperated-sounding spokesperson said:

“The Home Office takes security incredibly seriously and we have explained to Plymouth Live several times why this is not a security breach.

“This word would not have allowed members of the public or Home Office employees to access any Home Office systems.

“It was simply used to take our employees only through to a page where they would then have create a high security password, and cannot be used to access Home Office systems.”

I think that means that the password allows workers to access a webpage where they can choose a different password for themselves… which hopefully isn’t “Letme1n” or “Passw0rd2”.

One hopes that this webpage where users can choose their passwords isn’t accessible to the outside world, otherwise someone could easily go there and mess-up a new worker’s first day in the job, locking them out of the system.

That may be not be a realistic threat, but I see a number of real problems here: