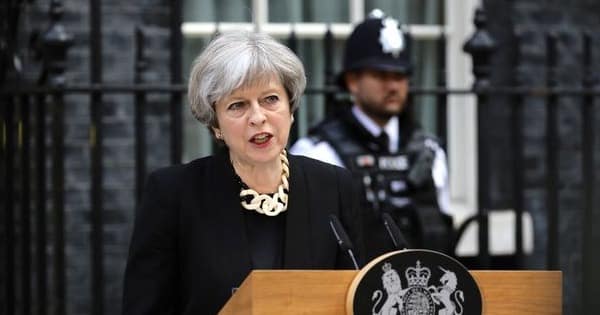 As we’re all aware, a number of people – including children – have been murdered by a bunch of complete arseholes in London and Manchester.

The most recent attack occurred in London on Saturday night, and with a General Election just days away it was inevitable that some politicians would steer the horrific events in an attempt to win some votes or damage the reputation of their rivals.

We even saw the US President try to bring the UK’s tough gun laws into the argument (although clearly the killers would have been able to murder many more people if they had been equipped with machine guns rather than knives and a white van).

The Conservative party, which is the bookies’ favourites to win the election and return Theresa May as Prime Minister, have taken the opportunity to beat a familiar drum: it’s the internet’s fault.

According to a speech given by Theresa May this weekend, “enough is enough”:

“We cannot allow this ideology the safe space it needs to breed. Yet that is precisely what the internet, and the big companies that provide internet-based services provide.”

“We need to work with allied democratic governments to reach international agreements that regulate cyberspace to prevent the spread of extremist and terrorism planning. And we need to do everything we can at home to reduce the risks of extremism online.”

Notice there is no call for the banning of knives or white vans.

Home Secretary Amber Rudd has predictably chimed in, echoing her leaders’ position, telling the media this weekend that internet companies need to work with the authorities to “limit the amount of end-to-end encryption that otherwise terrorists can use.”

Good luck with legislating the internet, or preventing people from using end-to-end encryption for their online communications. Let me know when you’ve managed that one.

Even if the UK government was able to force tech giants to weaken the security of their products by incorporating backdoors into their communication services, what does that actually achieve?

Anyone who cares about their online security and privacy would simply use other services to communicate that haven’t given in to the UK government’s demands.

How is the UK going to block Britons from downloading end-to-end messaging software from websites beyond the UK’s control? How will it prevent Brits from compiling free open source apps if they care about their privacy?

And that’s before you raise the spectre that any weakness in end-to-end encryption opens opportunities for organised criminals and state-sponsored hackers to exploit the same backdoor to spy and to steal.

Some British political parties are portraying the internet and encryption as convenient bogey men, blaming them for acts of terrorism rather than asking more difficult questions about whether the country has made mistakes in foreign policy, made too many cut-backs in policing, or been too willing to turn a blind eye to the activities of other countries in the hope of doing business.

Encryption isn’t a bad thing. As I’ve described before, encryption is a good thing, and we shouldn’t be looking for ways to weaken or outlaw it. If anything, we should be encouraging its wider use.

Anyone who tells you different is either ignorant of how end-to-end encryption (and presumably any modern technology) works, or is simply engaged in political grandstanding in a last-minute attempt to appeal to non-technical voters.

Stop press! Woah! A UK politician has actually said something sensible about internet surveillance. Shame that his party is unlikely to win on Thursday.