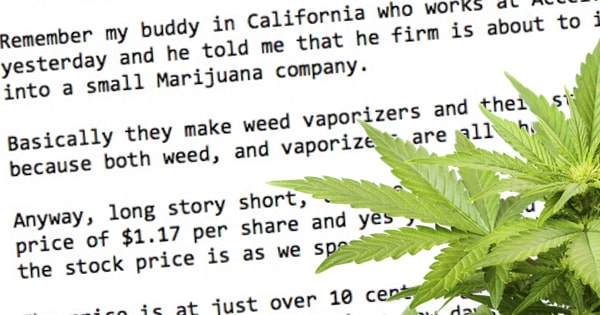 In recent months I’ve seen an increase in stock pump-and-dump spams arriving in my email inbox. You could probably describe it as a growing industry.

The emails are sent with the intention of encouraging the great unwashed public to buy cheap shares in a particular company, often claiming to have inside information that the price is about to go sky high.

What’s happening is this. The spammers are attempting to artificially inflate a stock’s price (the “pump”). They send out bogus “good news” about a particular company, and hope to trick you into buying shares in the hope that you’ll make riches.

However, the spammers sell off their stock at the inflated price (“the dump”), making a tidy profit, and often cause the stock price to slump further for those who made the mistake of investing.

Today I saw things had fired up again, as I received another barrage of pump-and-dump spam emails, suggesting I urgently invest in a “small marijuana company”: 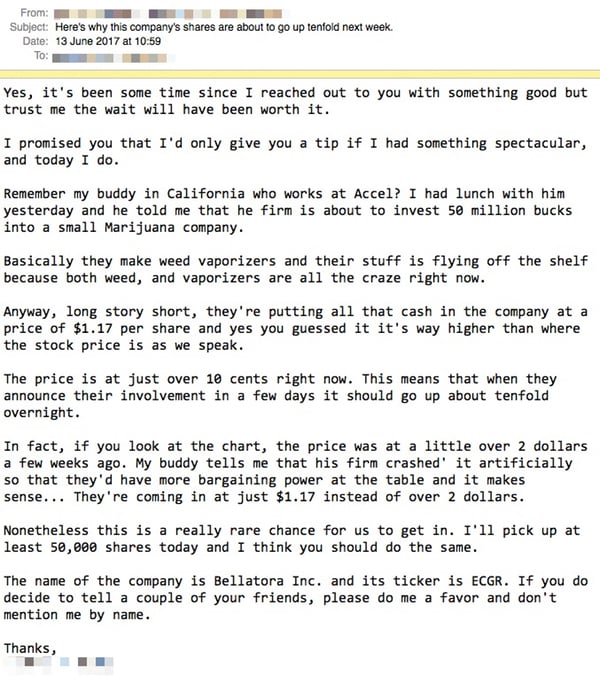 Part of the email reads as follows:

Yes, it’s been some time since I reached out to you with something good but trust me the wait will have been worth it.

I promised you that I’d only give you a tip if I had something spectacular, and today I do.

Remember my buddy in California who works at Accel? I had lunch with him yesterday and he told me that he firm is about to invest 50 million bucks into a small Marijuana company.

Basically they make weed vaporizers and their stuff is flying off the shelf because both weed, and vaporizers are all the craze right now.

Anyway, long story short, they’re putting all that cash in the company at a price of $1.17 per share and yes you guessed it it’s way higher than where the stock price is as we speak.

I hate to be a buzz kill, but you would be a dope to take investment advice from unsolicited spam like this. Don’t let your senses go to pot – budding investors would be wise to weed out the bad advice in their inbox.