Everyone likes a laugh, but it’s not always quite so funny if you’re not in on the joke.

Take this example, for instance. 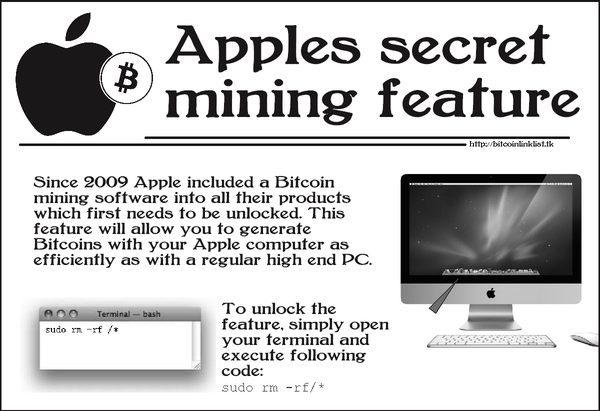 Since 2009 Apple included a Bitcoin mining software into all their products which first needs to be unlocked. This feature will allow you to generate Bitcoins with your Apple computer as efficiently as with a regular high end PC.

The image comes from the pranksters on 4Chan, and plays on interest in the Bitcoin digital currency. With many people intrigued by mainstream newspaper stories about Bitcoins, but lacking in knowledge about how to dip their toe into the waters of Bitcoin mining, there is a danger that some folks could take the advice seriously.

And that, of course, would be a big mistake. 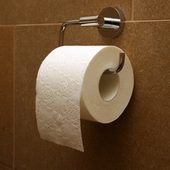 Because typing rm -rf/* on a Unix system (including Mac OS X) tells your computer to delete all of your files and folders.

Yes, your data just got flushed down the toilet.

Most of the denizens of 4Chan are probably in one the joke, and will give an evil grin at the suggestion.

But there's always a danger that other wannabe Bitcoin miners will see the "advice" and follow it to the letter with data-destroying results.

That's one of the problems with the internet. It's not always easy to tell when someone is joking.

According to the Daily Dot website, some users may have already made that mistake with unfortunate consequences.

And, before people get too smug about the misfortune of their Apple-loving cousins, it's easy to imagine how a similar hoax could be spread targeting gullible Windows users.

Once again, do be careful about trusting what you read on the internet and learn to get advice from legitimate sources before doing something perhaps foolish with your computer.. Oh, and maybe it's time you started doing regular backups too.