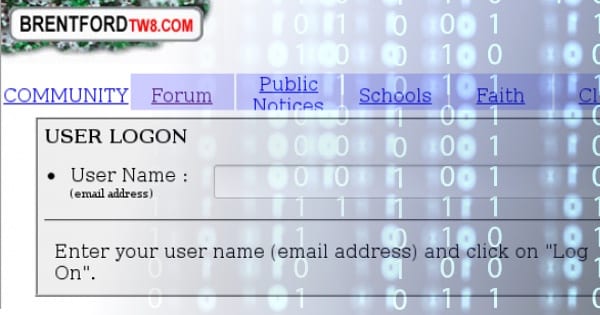 A security analyst found himself banned after he publicly disclosed multiple vulnerabilities affecting a series of web forums.

Not an ideal response to reporting security issues… pic.twitter.com/8MhL0jmlho

NeighbourNet is a network of local news and community information websites based in West and South West London. The platform powers www.BrentfordTW8.com, www.ChiswickW4.com, and other websites.

Tierney’s relationship to NeighbourNet dates back at least to the beginning of May, when he first informed the platform’s administrators of four security problems.

Many if not all of the issues result from an overly simplistic website design. For instance, users do not need a password to authenticate themselves. All they need is their email.

The issues don’t get better once users have signed in. NeighbourNet’s forums pass a user’s name and email as a parameter whenever they post a message. That means someone could masquerade as other users and post messages under their names.

This is a dangerous security oversight, as Tierney explains in a blog post:

“The site embeds its own content using a URL passed as a GET parameter. The source of this content is not whitelisted or validated, so you can just embed your own content. This has only been tested with plain HTML, but if JavaScript, Flash or other content could be embedded, this would lead to cross-site scripting or malware delivery to users.”

Tierney first notified NeighbourNet of the security flaws on May 3. After chasing for a response from the company, he decided to notify the platform on June 14 that he would go public with the vulnerabilities around July 4 if the bugs weren’t fixed by then.

On June 17, he received this response from the company:

“Chatted to the development team about the issues you raised.

They acknowledged that you have identified some potential security holes but they have existed for a long time without ever been exploited and there seems little incentive for anyone to try to do so.

We have been for some time now working on completely overhauled site architecture and whilst this project has been ongoing for sometime we are now talking in terms of months rather than years before implementation. This would close these security holes and others.”

NeighbourNet went on to tell The Register that the company’s sites contain no “nasty vulnerabilities that could compromise users” and that Tierney had so far failed “to give a single example of any actual occasion on which security is compromised.”

As revealed by its comments, while NeighbourNet is willing to acknowledge its site contains some “potential security holes,” it refuses to accept the fact that anyone has or will ever have any motivation to exploit those flaws in the future.

That’s pretty small thinking. NeighbourNet is an information resource, which means attackers could at the very least deface it, spread hateful messages while posing as legitimate users, and disseminate malware to unsuspecting visitors.

Ignorance and blind faith might feel reassuring in the moment, but at the end of the day, they’re only a mindset. They don’t efface the seriousness of glaring security vulnerabilities, which is why Tierney decided to go public with them on July 10.

NeighbourNet might have banned him as a result, but all of us in the security community should thank Tierney for practicing responsible disclosure and for attempting to work with a platform in order to keep its users safe.