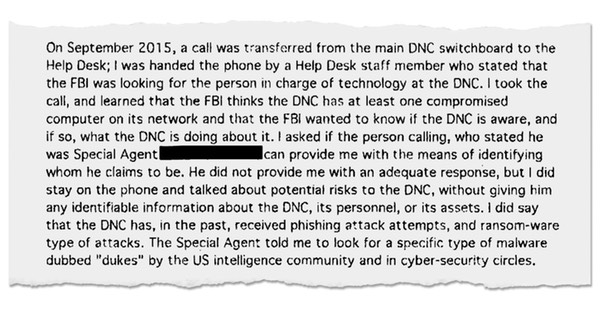 Am I surprised by the suggestion that Russia might have hacked into the DNC to mess with Hillary Clinton’s chances of becoming US president? No, of course not. That would be entirely plausible.

Just as you wouldn’t be surprised to uncover that the United States might have tried to meddle with elections in other countries.

All that’s changed is that we’re all trusting our sensitive information to computers these days.

No, what surprises and disappoints me is the FBI’s failure to warn the DNC effectively of the seriousness of just what was going on.

As the New York Times reported earlier this month, the FBI initially reached out to the DNC via telephone:

Mr. Tamene, who reports to Mr. Brown and fielded the call from the FBI agent, was not a full-time DNC employee; he works for a Chicago-based contracting firm called The MIS Department. He was left to figure out, largely on his own, how to respond — and even whether the man who had called in to the DNC switchboard was really an FBI agent.

“The FBI thinks the DNC has at least one compromised computer on its network and the FBI wanted to know if the DNC is aware, and if so, what the DNC is doing about it,” Mr. Tamene wrote in an internal memo about his contacts with the FBI He added that “the Special Agent told me to look for a specific type of malware dubbed ‘Dukes’ by the U.S. intelligence community and in cybersecurity circles.”

Part of the problem was that Special Agent Hawkins did not show up in person at the DNC. Nor could he email anyone there, as that risked alerting the hackers that the FBI knew they were in the system.

Mr. Tamene’s initial scan of the DNC system — using his less-than-optimal tools and incomplete targeting information from the FBI — found nothing. So when Special Agent Hawkins called repeatedly in October, leaving voice mail messages for Mr. Tamene, urging him to call back, “I did not return his calls, as I had nothing to report,” Mr. Tamene explained in his memo.

At that point, wouldn’t it have been worth the FBI popping around to the DNC’s offices if they weren’t returning their calls? How much effort would that have been? One imagines that they would have been able to convince the DNC pretty quickly that they really were the FBI then…

According to Google Maps, it’s about a six minute drive from the FBI to the DNC’s Washington DC headquarters. Or 25 minutes (just over a mile) if you fancy a gentle stroll, which would leave you enough time to pick up some donuts on the way. 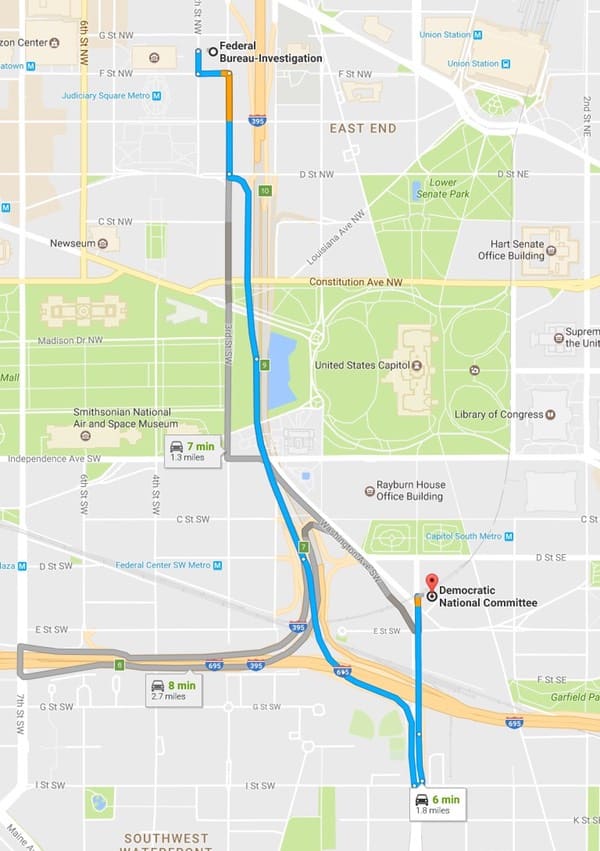 Seems to me that I go to more effort when I fix relatives’ computers than the FBI goes to protect a front runner in the US presidential election.