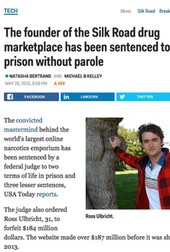 Ouch. That’s got to sting.

Ross Ulbricht probably knew he was going to have the book thrown at him, but I’ll bet he had a shred of hope that it wouldn’t be quite so heavy.

As USA Today reports, 31-year-old Ulbricht has been sentenced by a US federal judge to two life prison terms without parole.

Ulbricht, as you will surely recall, was the mastermind behind the notorious dark web Silk Road marketplace which made ordering drugs or illegal weapons about as easy as buying a book on Amazon. In February, Ulbricht was found guilty of trafficking drugs via the net. In addition he was convicted of conspiracy for trafficking narcotics, computer hacking, money laundering, and running an enterprise that illegally generated an eye-watering $1.2 billion worth of drug transactions.

Now, Ulbricht has received a stiff sentence – including two terms of life in prison and three lesser sentences.

In addition to the prison sentences, Ulbricht (who styled himself “Dread Pirate Roberts” when anonymously running the Silk Road) has been told he will have to forfeit $184 million of the $187 million his site had made before it was shut down upon his arrest.

Ulbricht apologised and pleaded for leniency from Judge Katherine Forrest, but she doesn’t appear to have been particularly moved:

There’s a tragedy here without a doubt.

There’s tragedy for those people whose family members died as a result of the drugs that Ulbricht’s Silk Road marketplace allegedly sold to them. The court heard accounts of six drug-overdose deaths involving people who had purchased illegal narcotics from the Silk Road site, and heard moving impact statements from victims.

It’s hard to imagine the grief that those families must have endured, and will continue to haunted with for the rest of their lives.

There’s heartbreak for Ulbricht’s family and loved ones, who through no fault of their own have lost someone they care for to the prison system for many many years.

The pained Ulbricht family outside the courthouse after life sentence in #SilkRoad trial pic.twitter.com/6zep2F7oCW

And let’s not forget Ulbricht himself. 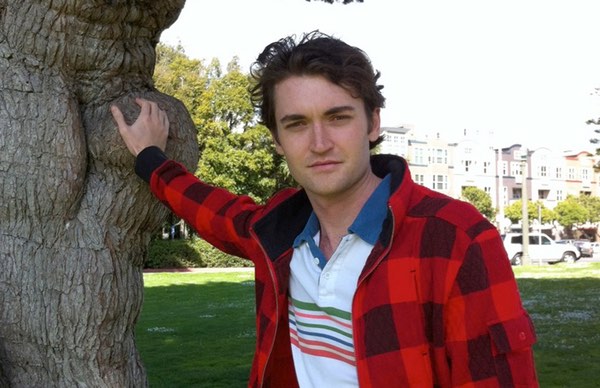 His life has gone down the plughole, and he’s looking at spending many many years in prison. Which is a tragedy – even if you believe he deserves it.

There will no doubt be those who say “At least he still has life, unlike some of those who died as a result of the drugs that he helped sell.”

And that’s a fair opinion, but it doesn’t take away the fact that Ulbricht’s life should never have gone this route.

By all accounts Ulbricht had the business acumen and technology know-how to have helped create a legitimate dot com business, and made his fortune that way. Instead, he chose to break the law and put people’s lives at risk.

Don’t be dumb kids. If you have the skills, put them to a legitimate, constructive positive purpose and hope to get some satisfaction and maybe the reward you’re looking for that way. Don’t make the world a sadder place than it already is.

2 comments on “Silk Road’s Ross Ulbricht sentenced to life in prison, without parole”