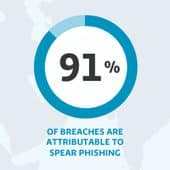 The security gurus at Proofpoint have put together a neat infographic that may open your eyes about the threat posed by spear-phishing and targeted attacks.

The firm released the infographic as part of its countdown of what it says top 10 advanced threats impacting businesses today.

Malicious emails pretending to come from online stores and payment sites (for instance Amazon and PayPal), social networks like LinkedIn, bogus faxes and scans, and UPS/Fedex/DHL fake deliveries make up over 70% of all of the attacks seen, according to the infographic.

Furthermore, 70% of spear phishing emails are opened by their intended targets.

Don’t forget – even if you think your company isn’t likely to be at risk of being targeted in an attack, online criminals could be intending to compromise computers at your business with the ultimate intention of infiltrating systems at one of your customers.

Infographics like this one produced by Proofpoint are useful as they provide an attractive way to represent security issues to people who may traditionally have been difficult to engage (for instance, your common-or-garden users or your senior management team).

If you click on the graphic above you’ll find a much larger version, which I’m sure Proofpoint won’t mind if you pillage for use in your own PowerPoint presentations.