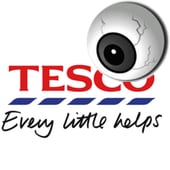 Tesco, the humungous supermarket chain, is introducing face-scanning technology at its petrol stations – so it can target you with adverts.

The technology, produced by French-based Quividi in association with Alan Sugar’s company Amscreen, will be capable of determining customers’ gender and approximate age while they wait in a queue to pay, and show advertising on a nearby screen.

And this isn’t some small trial project – Tesco is installing the technology in all of its 450 petrol stations across the UK.

Ke Quang, Chief Operating Officer at Quividi, was at pains to stamp out any privacy concerns that members of the public might have about the face-scanning technology, telling The Guardian:

“We don’t do facial recognition, we do face detection. It’s software which works from the video feed coming off the camera. It can detect if it’s seeing a face, but it never records the image or biomorphological information or traits. It picks up if it’s seeing a man or a woman, the amount of time they pay attention to the screen, and their presence in front of the screen. The key thing though is that it never records or remembers any information. If you go from one camera in one location to another, it can’t tell.”

Well, I certainly hope that’s right. But I’m sure I’m not the only person who finds the thought of this creepy and unpleasant.

A corporate video from Amscreen puts some spin on the face-detection system, and attempts to allay fears further.

It feels like our privacy is being slowly eroded, and further intruded upon time and again… Will it be any surprise in a few years time if technology like this is integrated with Facebook’s facial recognition database, to serve up adverts based upon our Likes?

Even if you don’t think this is a privacy issue, don’t you think we all deserve some peace and quiet from the relentless drone of advertising, bombarding us hundreds of time every day?

Seeing as I can’t bring myself to wear a baseball hat or balaclava, I guess I’ll have to make sure I always pay for my petrol at the pump in future…

What do you feel about Tesco using face-scanning technology? Take the poll below, and have your say by leaving a comment.