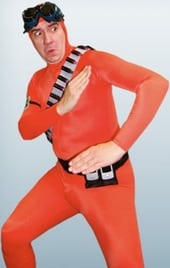 Making a good video isn’t easy, and even if you put blood, sweat and tears into it you can still end up with an awful YouTube movie that nobody wants to watch.

Security companies keen to jump on the social media bandwagon are as guilty as any other type of firm of throwing a pile of cash at a video company, in the hope that they’ll end up with some “viral” masterpiece.

And, inevitably, it can go badly wrong.

Fortunately – for those who need to learn a valuable lesson, or simply want to have a laugh at mistakes made by anti-virus firms’ marketing departments – YouTube acts as a graveyard for some of the worst, best-forgotten, attempts by anti-virus companies to get attention for their brand… and I’ve dug some of them up from their graves for you.

This ain’t no beauty contest, so in no particular order..

Someone at Kaspersky Labs thought it would be a good idea to make a video singing “Happy Birthday” to their founder, anti-virus veteran Eugene Kaspersky.

This video totally creeps me out. What company writes a song like this in honour of their founder’s birthday, has their staff appear in a video singing it, and then publishes it for the world to see???

Just imagine the awkwardness of being coerced to participate in such a cringe-worthy video? Yeuch.

In a kind of sinister way, it reminds me of this birthday song made by those oh-so-friendly-and-not-menacing-at-all Scientologist chaps in honour of their batshit crazy (and dead) cult founder L Ron Hubbard.

I find it hard to believe that this tribute was Eugene’s own idea, but that of a sycophantic marketing department desperate to impress their boss. I can only imagine he would have been deeply embarrassed by the resulting video, but too polite to ask them to erase it.

My hope is that it was probably made (with the best intentions) for an internal event and then was – tragically – unleashed onto the outside world.

But Eugene Kaspersky has to hold up his hands and admit some guilt for the following deeply unentertaining video – because he stars in it!

“Kaspersky, The Tsar of Russian Business” is filmed in the style of a old silent movie. And it does succeed in emulating the golden era of cinema in one way – just like a Charlie Chaplin movie it’s utterly unfunny.

Kaspersky. The Tsar of Russian IT business

What’s awful about this video, is that the Russian anti-virus vendor clearly spent a heck of time, scripting, renting costumes, casting for something which is utterly unwatchable.

Seriously, I challenge you to stay the course. It’s only 8 minutes 54 seconds long, but you’re a stronger man than me if you make it to the end.

The Sophos IT Vigilante

Dress up a British man (who appears to have had a nervous breakdown over a corporate data breach incident) in an orange gimp suit – that will sell security software for sure!

At least, that was the plan made by Sophos’s marketing department for its “IT Vigilante” campaign a few years back.

The IT Vigilante - Death Wish

This video is almost rescued by being subtitled from the original Japanese. But, however quirky, 4 minutes 40 seconds is far too long.

That’s a lesson that all marketing videos should probably learn – shorter is better.

If your video runs for too long, you run the risk (see Kaspersky’s silent movie above) of appearing self-indulgent, and more fun for the videomakers than the viewing public.

In 2010, Symantec bizarrely teamed-up with rapper Snoop Dogg in an awareness campaign called “Hack is Wack”. The idea? Make an anti-cybercrime rap video and enter it into a competition to win a Toshiba laptop, some tickets to one of Snoop’s concerts and an opportunity to meet Snoop Dogg’s management team.

Did you spot that? Snoop Dogg’s management team. Not Snoop Dogg himself.

Sure, Snoop was happy enough to collect a bag of cash to be interviewed about the Hack is Wack campaign, and photographed in front of Symantec logos, but he couldn’t be bothered to meet the saddos who actually went to the effort of making a rap video.

Perhaps unsurprisingly, the campaign was ridiculed on the internet. Symantec has long taken down its promotional videos featuring Snoop and its associated website content, but fortunately some net users captured the magic for posterity.

"Hack is Wack": What were they Thinking?

History doesn’t record who ultimately won the competition, and what Snoop Dogg’s management team made of them.

But some of the competition entries can still be found on YouTube. Watch if you dare…

Sadly for the Norton marketroids behind this campaign it drew most attention from the media because of the inept implementation of the www.hackiswack.com website (now offline) which was rife with security vulnerabilities.

Disagree with my choices? Have another favourite (or non-favourite) anti-virus company video that you think should be remembered? Leave a comment below!

Leave a Reply to Mark A Cancel reply