More than two weeks after the mysterious demise of the TrueCrypt encryption tool we’re none the wiser about why the project abruptly shut down. 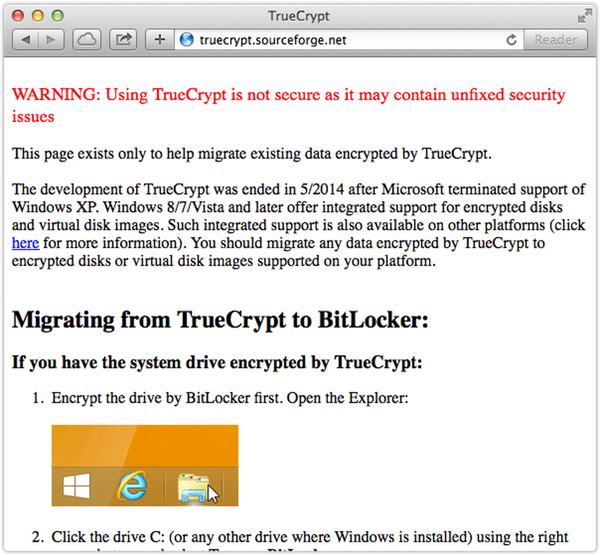 But now some are claiming that the clue was right beneath our nose all along.

See that first sentence on the TrueCrypt project’s homepage on SourceForge?

WARNING: Using TrueCrypt is not secure as it may contain unfixed security issues

If you take the first letter of each word (except the word “WARNING”) you get:

Perhaps not, allege those with a love of unravelling puzzles. Because if you split “utinsaimcusi” up with a few judicious spaces you end up with…

Which Google translates from Latin as:

Some claim that – in context – the letters roughly translate to:

(Boy, I wish I had been taught Latin at my school…)

You can read more about the conspiracy theory (trust me, it goes far beyond what I’ve reported above) in a post here.

Maybe it doesn’t really matter to most of us quite why TrueCrypt shut down. What’s clear is that no-one who is security conscious can trust the software ever again.

As I said at the end of last month, it’s time to start looking for an alternative way to encrypt your files and hard drive.

Crazy or genuine conspiracy? Let us know what you think by leaving a comment below.

33 comments on “Did TrueCrypt’s developers embed a hidden Latin message for us all?”