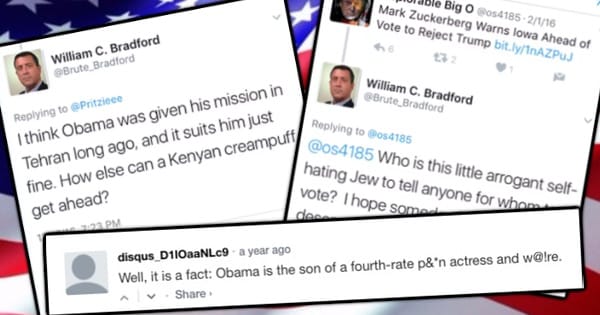 You think you’ve had problems online?

Spare a thought for William C Bradford, an American lawyer who was recently appointed by Donald Trump to run the Energy Department’s Office of Indian Energy. 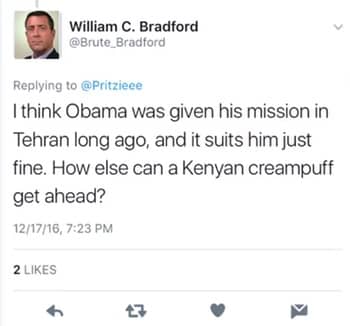 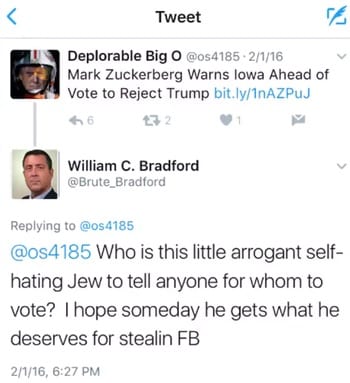 The tweets from @Brute_Bradford have since been deleted, and Bradford emailed an apology to the newspaper:

“As a minority and member of the Jewish faith, I sincerely apologize for my disrespectful and offensive comments. These comments are inexcusable and I do not stand by them. Now, as a public servant, I hold myself to a higher standard, and I will work every day to better the lives of all Americans.”

Okay, so that would be awkward enough. But if you’ve owned up to acting in an inappropriate way, don’t be surprised if other media outlets wonder if they might be able to dig up some other past misdemeanours.

However, we would be wrong to jump to conclusions that these Disqus messages were sent by the same person who admitted sending the tweets.

Because, it turns out that William C Bradford was not the potty-mouthed scamp who left those comments uncovered by CNN, but instead he is actually the victim of a hacker.

And possibly not just one hacker, but a concerted attempt “over the past several years” by hackers to attack him and break into his email, according to a statement the recently appointed DOE office director gave to CNN:

“I cannot comment on an ongoing federal investigation into multiple cyber attacks and Internet crimes committed against me over the past several years, to include email intrusions, hacking, and impostors in social media.”

Obviously no-one deserves to be hacked. And it must be ghastly to have your account hijacked by others who seem dead set on damaging your public reputation year after year.

It’s a ghastly situation, but Bradford has done the right thing calling in the Feds to investigate what’s been going on. I hope they will do a through investigation and determine precisely who was behind this scurrilous attack.

By the way, in 2015, Bradford resigned from the US Military Academy at West Point after urging attacks on Islamic holy sites and claims he exaggerated his military service record and academic career.

Unless, of course, that was the hackers too.

For further discussion on this story, make sure to listen to this episode of the “Smashing Security” podcast: