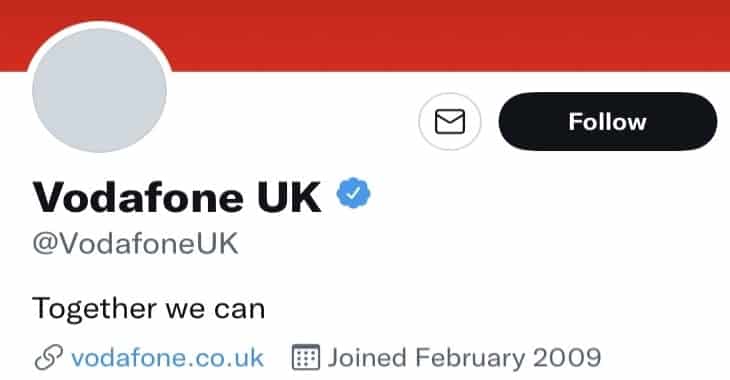 Vodafone customers in the UK are spitting tacks after an “issue” has left them unable to use Twitter properly for days, after the display of images and movie files, and – in some cases – the entire website, was blocked.

According to numerous social media posts from hundreds of Twitter users, for four days they have not been able to view images and movie files attached to tweets or profile images, unless they have already downloaded the image via a Wi-Fi connection.

The common denominator for these Twitter users? They are all accessing Twitter via a Vodafone 4G connection.

And some even find that Twitter is still not being displayed properly via their Wi-Fi connection if, like me, their home’s Wi-Fi uses mobile broadband provided by… you guessed it… Vodafone.

Here’s a screenshot of one complaint showing the difference between accessing Twitter via Vodafone and another cellphone provider (I would have embedded the tweet, but if you’re a Vodafone customer you probably wouldn’t be able to see the image.) There’s no suggestion that Vodafone’s users are suffering from this “denial of service” because of a malicious act. Instead this feels like more of a common-or-garden cockup to me. Chances are that Vodafone was putting some filters in place and err… got a little over-enthusiastic.

Is it the biggest problem facing the world right now? No it’s not. But it’s still a ruddy nuisance, especially for a Twitterholic like myself. If you’re struggling to access Twitter properly, and are not able to hop onto a non-Vodafone connection, then you might try using a reliable VPN to see if that skirts around whatever block Twitter has mistakenly put in place.

Requests for comment from Vodafone’s PR department have so far gone unanswered.