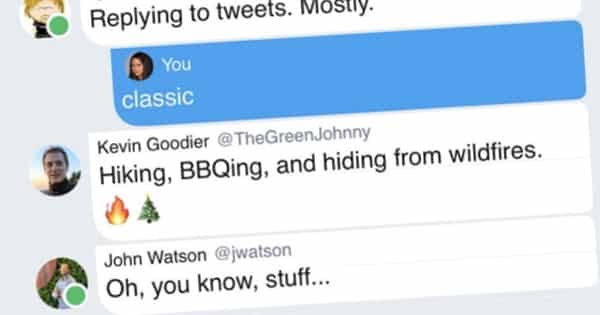 Twitter is testing a new feature that would inform your followers if you are currently online.

The feature, revealed in a post from Twitter’s director of product management and shared more widely by Twitter CEO Jack Dorsey, reveals that the site is toying with the idea of displaying a green dot next to active, online users.

hey Twitter. we've been playing with some rough features to make it feel more conversational here. presence and reply threading. still early and iterating on these ideas. thoughts? pic.twitter.com/3U3NvpHWPy

What isn’t entirely clear, however, is whether Twitter plans to make the feature opt-in or opt-out when/if it eventually rolls out to the great unwashed masses.

And it’s easy to imagine how digital stalkers could use such a feature to harass victims (“I know you’re online… why haven’t you replied to my message?”)

It should be my choice whether that’s the kind of information I wish to share publicly what I’m doing. The risk is that Twitter will view such a feature as a way of encouraging engagement between Twitter users, and will make the feature enabled by default. Many users probably wouldn’t be aware that such a feature was enabled.

My hope is that if Twitter does ever roll out this feature it will follow the example it uses with location – where users have the option of sharing their location, but the functionality is (quite rightly) disabled by default.

Maybe the resources Twitter is putting into displaying whether a user is online or not could instead be directed at dealing with the considerable problem of malicious bots, Nazis, and its failure to police its terms of service more rigorously.

Update: Sara Haider, Twitter’s director of product management, has confirmed to me that the “presence” feature will be opt-in:

To hear more discussion about this issue, be sure to check out the “Smashing Security” podcast:

Smashing Security #94: 'Rogue browser extensions, Twitter presence, and how to cheat in exams'