It would be nice to think George Harrison could rest in peace. But it seems his official Twitter account, run by the late Beatle’s estate, was briefly hijacked by a hacker.

The hacker appeared to be oblivious to the fact that Harrison had died in 2001, long before Twitter had been created, which made their attempt to reach out to “The Quiet One” to help him secure his account look a little silly. 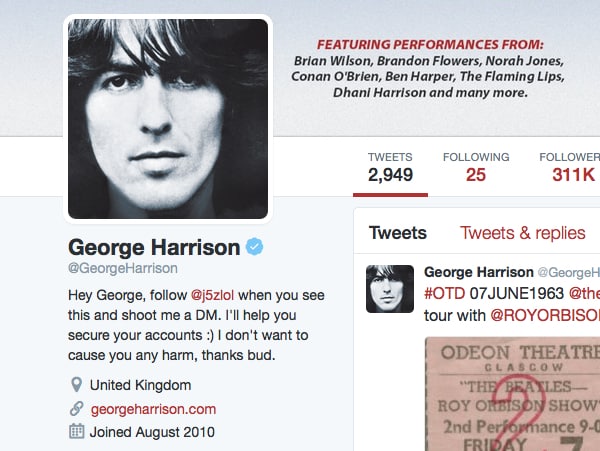 The hacker changed the brief biog on the @GeorgeHarrison profile to read as follows:

Hey George, follow @j5ziol when you see this and shoot me a DM. I’ll help you secure your accounts :) I don’t want to cause you any harm, thanks bud.

As I explain in my video about the incident, when the hacker realised that Harrison had actually died 15 years ago he felt a complete wombat.

There are a few lessons here:

One comment on “VIDEO: George Harrison finds death is no escape from hackers”