If you’re one of the few people who owns a Windows RT tablet, don’t waste any time just yet trying to update to the newly released version of the operating system.

Because Microsoft has been forced to halt downloads of Windows RT 8.1 operating system, after users experienced an what the firm described as a “situation” with the free update. 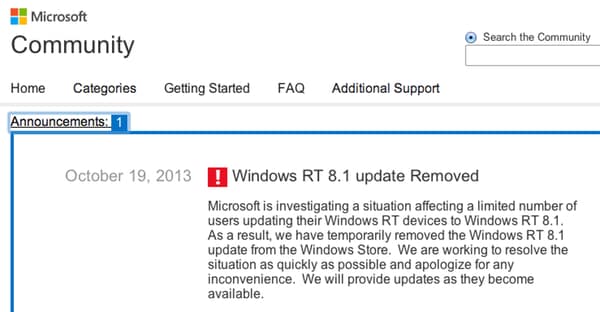 Microsoft is investigating a situation affecting a limited number of users updating their Windows RT devices to Windows RT 8.1. As a result, we have temporarily removed the Windows RT 8.1 update from the Windows Store. We are working to resolve the situation as quickly as possible and apologize for any inconvenience. We will provide updates as they become available.

And this appears to be confirmed by reports from users, who said they saw the following message appear on their tablet screens:

Your PC needs to be repaired

The Boot Configuration Data file is missing some required information.

Unsurprisingly, the update has been pulled from the Windows Store.

The good news is that the issue appears to affect the Windows RT-flavoured 8.1 update, rather than the regular version. And in comparison to the standard version of Windows 8 which runs on regular computers, hardly anyone has bought a Windows RT tablet.

Maybe it’s a good thing that Windows RT and Microsoft’s Surface tablets which run the operating system have been such a flop with customers – or many more people would potentially have been impacted by this flaw.

However, this latest screw-up is definitely damaging and embarrassing for Microsoft, and another unwanted hit on the beleagured Windows RT brand.

If you are one of the unfortunate ones who has already bricked his Windows RT device by installing Windows RT 8.1, here are some helpful recovery instructions.